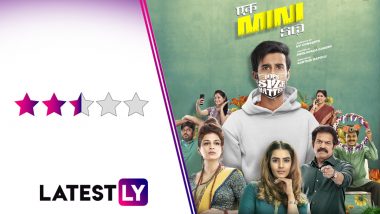 Santosh, you know, suffers from 'small penis syndrome', that has developed since he was mocked once by a classmate in childhood. His inferiority complex over his organ gets worsened further through adolescence and into adulthood. Then through an arranged marriage alliance, he falls for a pretty Amrutha (Kavya Thapar) to whom he gets married to. But his continual anxiety over how she might be disappointed over his 'size' makes him seek hurdles in them getting intimate.

In the era of cancel culture, it is a huge risque to make an adult comedy without offending anyone. It is even riskier to make a comedy that makes you laughs. Delhi Belly has show that you don't need be crass to serve laughs. The recent Jathi Ratnalu showed that comedy business can be a success if you have the right cast, the quotes that click with the audiences and a snazzy treatment to boot. Jathi Ratnalu Movie Review: Naveen Polishetty Leads the Charge in Making You Laugh in This Hilarious Comic-Caper!

Ek Mini Katha clicks some of the boxes, all right. Through Santosh's misdemeanors in working around his problem, there are some funny gags as he lands from one trouble into other, most of them self-orchestrated. It helps that the actor Santosh Shoban is a natural talent with a great comic timing, and his camaraderie with Sudarshan, who plays his troublemaker friend, possesses enough ammunition and great quips (loved that 'Sonu Sood' reference!). The scenes with the penis enlargement surgeon (Posani Krishna Murali) will bring the house down.

Even if the situations aren't really new, the actors liven up the proceedings. The director Karthik Rapolu also has to be credited for making the first half so snappy. The best thing is that the makers didn't resort to any crudeness or vulgarity even when the jokes go below the belt.

The romantic portions between Santosh and Amrutha are cute, and their chemistry intact. Which is why there is enough curiosity on how Santosh handles his issue post his marriage.

Here comes the problem, though. The second half, which involves Santosh's extended family, is comparatively weaker, the gags don't flow freely and some of the scenes feel dated. From a bold comedy, the movie turns into a family potboiler from the '80s. Shraddha Das' hookah-smoking seer was supposed to spice up the proceedings, but that doesn't really happen. The only saving grace here is once again the lead star's performance.

More annoying is the film's treatment of the female lead. Kavya looks absolutely vivacious, but her character feels more like a glam prop that serves as a catalyst for her husband's anxiety disorder than anything. I mean, she was supposed to be an event manager, but we mostly see her as this docile housewife obsessed with her man's apparent goodness. Also, most of Santosh's relatives turn out to be irritating, which makes the couple's wedding reception sequence, where these characters are introduced, more irksome than intended.

Ek Mini Katha goes a little serious in the climax, as it preaches on how sexual inadequacy is more of a perception that the society pressurises a person into, and how the blame falls on the parents in not addressing a child's curiosity over such matters. All well and good, but just a few scenes back, the movie was poking fun on suicidal tendencies! Isn't that something the society needs to be sensitive about? Or for the matter, Ek Mini Katha's tendency to deliver laughs from physical violence. When on one hand. you make the hero say that women should not be ridiculed or demeaned in public, on the other hand, you have a character slap a woman for some cheap laughs! Double standards, much? The songs by Pravin Lakkaraju are quite nice.

- A Funny First Half

- A Stretched Less Funny Second Half

- Its Handling of Suicidal Tendencies and Physical Violence

Of course, Ek Mini Katha should be appreciated for taking on a bold theme. But I can't help but wish if the film handled it with more sensitivity without losing out on the humour. It isn't a difficult task, just look at how the 2013 Tamil film Kalyana Samayal Saadham addresses erectile dysfunction without making a joke out of it. Why, the first half of Ek Mini Katha almost does that job, only to let down by a weak second act. Ek Mini Katha is streaming on Amazon Prime Video.

(The above story first appeared on LatestLY on May 27, 2021 11:43 AM IST. For more news and updates on politics, world, sports, entertainment and lifestyle, log on to our website latestly.com).