Indian 2 Crane Accident: Lyca Productions Announce 2 Crore Financial Aid to Help the Families of the Unit Members Who Died and Those Injured in the Mishap

Earlier today, we reported that actor Kamal Haasan announced Rs 1 crore financial help to the families of the three-unit members who lost their lives in the mishap. 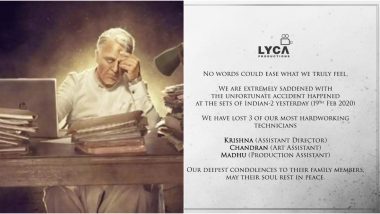 Kamal Haasan starrer Indian 2 had a rather unfortunate incident on its sets recently as a crane accident resulted in the death of three-unit members and injured ten others. The shocking mishap saddened not only the film's cast but also other actors from the industry who expressed their condolences to the families of those who lost their lives. Three people named Sai Krishna, Chandran and Madhu from the unit of the Shankar's next died while nine others were seriously injured when a crane fell on them while constructing the sets on February 19. Earlier today, we reported that actor Kamal Haasan announced Rs 1 crore financial help to the families of the three-unit members who lost their lives in the mishap. Indian 2 Crane Accident: Kamal Haasan Announces Rs 1 Crore Financial Help to the Families of the Unit Members who Died in the Mishap.

Now, we hear the film's producers, Lyca Productions too have announced 2 crores as financial aid for the unit members who tragically lost their lives and also those who suffered injuries during the horrible accident. Whilst reacting to the unfortunate incident, Indian 2's lead, Haasan had also tweeted saying, "Though (I) have met with and crossed many accidents, today's mishap is very horrific. I have lost three of my colleagues."Accident on Indian 2 Sets: Lead Actress Kajal Aggarwal Offers Deepest Condolences To The Families of the Deceased Crew Members.

According to the reports, the team had created the set at EVP in Poonamallee where the tragic accident occurred. LYCA Productions had also taken to their Twitter handle to condole the death of the three-unit members. The film's lead actress, Kajal Agarwal also expressed grief on Twitter saying, "Words cannot describe the heartache I feel at the unexpected, untimely loss of my colleagues from last night. Krishna, Chandran and Madhu. Sending love, strength and my deepest condolences to your families.May god give strength in this moment of desolation."

(The above story first appeared on LatestLY on Feb 20, 2020 10:34 PM IST. For more news and updates on politics, world, sports, entertainment and lifestyle, log on to our website latestly.com).