It's Mohanlal vs Mammootty, as Two Big Movies on Kunjali Marakkar are Getting Ready

We have to see which movie actually makes it to the finishing line first and who would emerge the winner in the battle of the Titans! 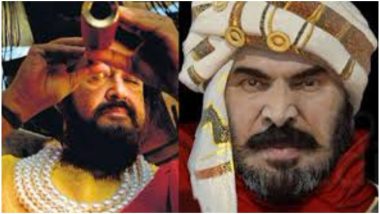 Fan Creations of Mohanlal and Mammooty as Marakkar

Remember the whole fiasco with Bhagat Singh biopics that happened years ago in Bollywood? Around half a dozen movies on the freedom fighter were made and released around the same time, with two starring Ajay Devgn and Sunny Deol respectively, coming on the same day itself! Now Malayalam cinema is all set to do something similar with the life of 16th-century warrior, Kunjalli Marakkar, with two biggies of the industry, Mammootty and Mohanlal, having their own take on the legend.

Both the projects have been in the pipeline for long, to the point that fans even wondered if the movies will be made. Then two days ago, Confident Group made a grand announcement that they are producing Mohanlal's take of Marakkar with Marakkar: Arabikadalinte Simham. The movie is projected to be made on a budget of Rs 100 crores, a budget that is hitherto considered unimaginable for a Malayalam movie. Priyadarshan would be directing the movie that would be released in five languages.

In the meantime, producer Shaji Nadesan, who is considered to be a close aide of Mammootty, had announced on his Facebook timeline that the pre-production of Kunjali Marakkar IV with Mammootty is in full swing. He also informed that the movie will begin its shoot from July 2018. Kunjali Marakkar IV will be directed by Santosh Sivan.

Speaking to TOI, Sivan confirmed the project is on. Speaking about this 'contest', he said, "Everyone associated with both projects is busy and it’s not like one fine day we can get them together and begin shooting to see whose film goes on floors first."

Sivan also confirmed that both his take and Priyadarshan's would be quite different, with Priyan's being the more ambitious one. He continued, "A week ago, Priyan had called me to ask when we would start shooting. I told him, ‘I am busy with a few films and the movie will only go on floors after that’. Priyan said he would definitely like to make a movie on Kunjali Marakkar; both films will be from different perspectives and there will be enough to differentiate the films. He said his film has more of sea warfare and will be made on par with international films. That will require a lot of time and he wanted people to be fully committed to the project."

We have to see which movie actually makes it to the finishing line first and who would emerge the winner in the battle of the Titans!

(The above story first appeared on LatestLY on Apr 30, 2018 07:18 PM IST. For more news and updates on politics, world, sports, entertainment and lifestyle, log on to our website latestly.com).