Jr NTR Birthday Special: 5 Lesser-Known Facts About the RRR Star That We Bet You Didn’t Know!

As the South superstar, Jr NTR celebrates his birthday today (May 20), we take a look at some of the interesting facts about the RRR actor that needs your attention now. Read on! 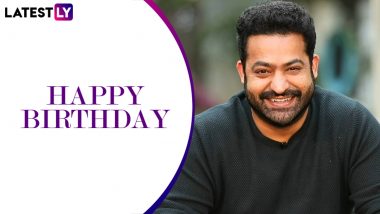 Nandamuri Taraka Rama Rao Jr, fondly known as Jr NTR or Tarak by his fans is a huge star down South. Over the years, the superstar has left an impeccable mark in the film industry which is unmatchable. Having said that, be it any role, his admirers always look forward to his movies. The actor's recent release RRR was a roaring success at the worldwide box office which minted more than Rs 1000 crore at the ticket window. And as the versatile star celebrates his birthday today (May 20), we take a look at some lesser-known facts about the actor that are noteworthy and how. RRR Movie Review: SS Rajamouli's Big Fat Optical-Overload, Starring Ram Charan, Jr NTR and Alia Bhatt, Is A Must-Watch In Theatres! (LatestLY Exclusive).

Like many stars, even Jr NTR has a lucky number which happens to be 9. Well, that’s the reason his Twitter handle reads "@Tarak9999". Also, reportedly,  all of his four-wheelers have the same registration 9999 for which he has paid whopping sum.

For the unaware, the actor is a member of the Nandamuri family, which is among Andhra Pradesh's most influential dynasties. He is also the grandson of Telugu actor-former CM, Nandamuri Taraka Rama Rao.

Well, the "Naatu Naatu" star happens to be a trained Kuchipudi dancer and also is fond of classical dance. Now, we know why he can just groove to any damn beat so smoothly ha? RRR: Jr NTR Pens a Thank You Note for His Film’s Co-Stars, Media and Fans for the Overwhelming Love! :

Not just a fab actor and dancer, Jr NTR is also a great singer. The Telugu superstar has lent his voice for many films, out of which his Kannada song titled "Geleya Geleya" from Chakravyuha is quite famous.

It was in 2001, when Jr NTR made his film debut with Ninnu Choodalani. Reportedly, it was for this movie wherein he was paid Rs 4 lakh as fees which he had handed it over to his mother Shalini. Aww!

That’s it, guys! These are some of the unknown facts about the South star that are quite interesting. Here’s wishing the terrific actor a very happy birthday from team LatestLY. Stay tuned!

(The above story first appeared on LatestLY on May 20, 2022 08:50 AM IST. For more news and updates on politics, world, sports, entertainment and lifestyle, log on to our website latestly.com).