SS Rajamouli's fictitious tale about two legendary revolutionaries and their journey away from home before they started fighting for their country in the pre-independence era is a visual treat like no other! Ram Charan and Jr NTR steal the show with their fire-packed action sequences and paisa vasool drama! The movie also stars Ajay Devgn, Alia Bhatt and Alison Doody. 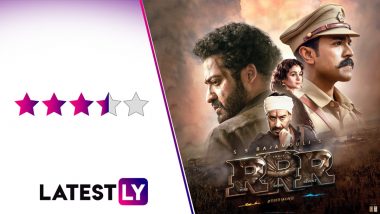 RRR Movie Review: Picture this. Every arrow shot shimmers like it's the ultimate weapon in the arsenal. Every drop of blood dripped redefines the colour red. Every water droplet shines, sparkles and screams at you like a roaring reminder reiterating that you have signed up for an SS Rajamouli's outing, after all, the maker of the monument of a film Baahubali, no less. RRR (Rise, Roar, Revolt) featuring Ram Charan and Jr NTR is a visual delight like no other, crafted to satiate the cinema taste buds like a big, splashy feast that refuses to get over. This giant meal of a movie experience will leave you so full that there's no space left to burp! RRR: Ravi Teja Expresses His Excitement for Ram Charan and Jr NTR’s Film, Says ‘It’s Going To Be Massive Indeed!’

Rajamouli defies the laws of physics and redefines larger-than-life notions with what has turned out to be a rather predictable tale, told in an unimaginable way. The scale, the structuring and the sheer technical audacity will leave your jaw dropped. Unlike Baahubali, this film is not high on storytelling but it keeps you invested with never before seen dramatization of events. He mounts the protagonists to a level that's unheard of and then keeps dishing out one filmy surprise after the other, much like the bullets his protagonist spray like there's no tomorrow,(with a technical bravura that will take your breath away). This optical delight is tailored smartly and strictly for a theatre experience. Take a bow master, for the sheer guts it takes in mounting this film at a scale that is difficult to match in Indian cinema.

What is pertinent to note and to feel proud of is the fact that Rajamouli wears his Indianness on his sleeves absolutely unabashedly-the trait was quite evident in Baahubali. But then again, that was the demand of the franchise, given the subject matter, some would argue. With RRR the maverick filmmaker reiterates his passion for mythology, the character references from the Puranas, the shlokas, the classical background score, the costumes and the loud fantastical narration. He makes Desi look oh-so-global with both passion and panache. RRR: Makers Drop Exciting Stills of Jr NTR As Bheem and Ram Charan As Ramaraju From SS Rajamouli’s Magnum Opus! (View Pics).

Set in the pre-independence era, RRR tells the story of Alluri Sitaramaraju (Ram Charan) a hot-blooded police officer posted by the British in Delhi. The man works as half secret agent and half brute force, willing to stop at nothing. He is introduced as 'Fire' with his rage and roar. He's on the lookout for the 'water' of this tale to complement his being. Komaram Bheem (Jr NTR) is a docile, innocent from the Gond tribal. Disguised as a Muslim, Bheem comes to the capital city to rescue a little girl called Malli who has been snatched away by Lady Scott (Alison Doody). Bheem is like a giant flowing, relentless Amazonian force and yet he is calm and soothing. What happens when 'Fire' and 'Hydro' power collide-will they try to nullify each other or will they join forces to bring the British Empire down! RRR: Ravi Teja Expresses His Excitement for Ram Charan and Jr NTR’s Film, Says ‘It’s Going To Be Massive Indeed!’

It's hard to miss how sharply has the maker divided his narrative in the clear-cut old-school beginning, middle, and end. He doesn't let a single opportunity to pass to remind you which part of the narrative you are invested in. He introduces the segments clearly but ostentatiously. And what drama! The interval slate is thrown at you with so much designing and detailed decoration that you wonder if that one shot with the kind of money involved in it could possibly fetch you a house in Mumbai. The rest of the sequences are equally crazy and they all are dripping in moolah.

From men flying into thin air to geysers of blood flowing freely, RRR is gory and glory both. There's no shortage of histrionics and bombastic dialoguebaazi either. In one scene, Bhim races his bike to its maximum momentum only to fling it on the dome of the massive British palace, off the road, as Ram shoots the petrol tank of the bike mid-air to make it land perfectly as a moving fire blob in the arsenal of the British Empire for the dynamo effect. Whistles!!!

In another scene, the fairly angrez Ram metamorphoses into Ram the deity. With that transformation, the sharpshooter police officer turns into a lethal archer in one brutal stroke. Relish this one for the maximum effect, for the brawn on display and the intensity of drama that comes with the dramatic transformation! Moments like these are plenty and trust you me, they are sheer pleasure to watch, logic be damned! Theatrical Releases Of The Week: Jr NTR, Ram Charan’s RRR, Will Smith’s King Richard, Ravi Teja’s Ramarao on Duty & More.

While the first half is shamelessly OTT but breezy, the second half gets a tad bit slow , but Rajamouli heightens the pitch and the intensity as he approaches the climax. Ajay Devgn as Ram's father and Alia Bhatt is the typical village belle as indeed his love interest provides the perfect foil to the drama at hand.

This cinematic treat is stuffed with paisa-vasool action sequences that are equally cash-rich and incredibly original. RRR is grandiose and it's fun. If wolf-whistling, thunderbolt clapping, and adrenaline-pumping visual treat is what you are looking for with unmatched technical bravura, you just can't afford to miss this one!

(The above story first appeared on LatestLY on Mar 25, 2022 10:54 AM IST. For more news and updates on politics, world, sports, entertainment and lifestyle, log on to our website latestly.com).