Kamal Haasan: Rajinikanth and I Are Great Friends Despite Politics

Kamal Haasan has said that politics and friendship are different and that he was a close friend of fellow superstar, Rajinikanth 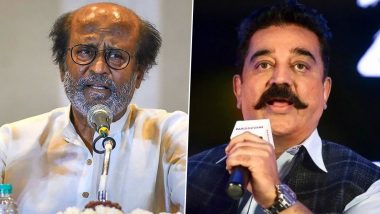 South Indian superstar and president of Makkal Needhi Maiam (MNM), Kamal Haasan has said that politics and friendship are different and that he was a close friend of fellow superstar, Rajinikanth and that they had decided when they were 25 as to where the relationship will reach. He said that they have a close personal rapport even though they had professional competition at times. Thalaivar 169: Has Rajinikanth Dropped Nelson Dilipkumar Post Beast Release? Director’s Twitter Bio Dispels The Rumours!

He also said that he was friends with Tamil Nadu Chief Minister M.K. Stalin, and his son and DMK MLA Udayanidhi Stalin. Kamal had come out with these statements during the audio and trailer launch of his latest movie Vikram. Kamal said that Rajinikanth was not able to come to the trailer launch but had called him up to wish him and to explain his non-availability for the programme. Rajinikanth and Boney Kapoor To Team Up for a Film? The Producer Quashes ‘Leaked Ideas’ (View Tweet).

(The above story first appeared on LatestLY on May 26, 2022 10:23 AM IST. For more news and updates on politics, world, sports, entertainment and lifestyle, log on to our website latestly.com).