K Balachander aka KB, one of the most-loved and highly-respected filmmakers of the country, has shaped the careers of actors Kamal Haasan and Rajinikanth. 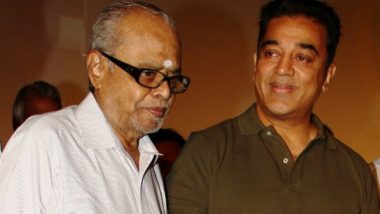 July 9, 2020, marks the 90th birth anniversary of the iconic filmmaker K Balachander, fondly known as KB. He was one of a kind of a filmmaker, known for unconventional themes, bold content, realistic stories based on social issues and relationships, and much more. His finest contributions to the world of cinema will be cherished until eternity. KB, one of the most-loved and highly-respected filmmakers of the country, has shaped the careers of actors Kamal Haasan and Rajinikanth and many others. Today, on his 90th birth anniversary, Kamal Haasan has paid tribute to the legendary filmmaker. K Balachander’s 90th Birth Anniversary: Looking at the Movies by the Revolutionary Filmmaker.

K Balachander had roped in Kamal Haasan for the film Arangetram and it was his first adult role. Kamal Haasan shared a tweet that read, “Mr K.Balachander A mere name with fame that I heard as a teenager. Who would have thought he would take many roles in the life of an actor like me. Benefactor, mentor, collaborator, father & now when I think of his child like energy, I feel the pride of a father. My salute to this important son of Indian Cinema.”

My salute to this important son of Indian Cinema.

(The above story first appeared on LatestLY on Jul 09, 2020 03:01 PM IST. For more news and updates on politics, world, sports, entertainment and lifestyle, log on to our website latestly.com).