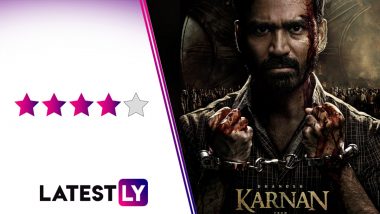 Karnan Movie Review: Dhanush, man! What a incredible performer you are! Sorry to gush about an actor in the beginning of a review, but this amazing actor, and two time National Award winning performer, deserves all the effing praise. Then there is the immensely talented Mari Selvaraj, whose debut directorial Pariyerum Perumaalum is nothing short of a classic. With Karnan, these two have managed to a create a film so evocative and hard-hitting that spells EPIC in every frame! Karnan: Dhanush’s Action-Drama Film to Premiere on Amazon Prime Video From May 14!

Karnan is inspired by the 1995 Kodiyankulam violence when a police force meted out inhumanities to a hamlet inhabited by a lower-caste community. Here, the timeline isn't fixed, though as per the theatrical release, the movie was set in 1997. The hamlet that is becomes the focal point of Karnan becomes Podiyankulam. This village has a close-knit community where the law and order and discipline are managed by the elders.

We meet Karnan (Dhanush), a young man in the hamlet, who likes to laze around, while his elder sister Padmini (Lakshmi Priyaa Chandramouli). He already has a rebellious streak that is waiting to evolve into something far bigger. His village doesn't have a bus-stop  and that has become a feud between Podiyankulam and its neighbouring village, inhabited by higher-casters, as the latter has one. The men there leer and jeer at the women of Podiyankulam when they come to catch bus from the stop. We also learn that Karnan had a younger sister who died in the middle of the road years ago, more so because the Podiyankulam  doesn't have a bus stop.

In fact, the movie begins with this discomforting scene of the girl lying on the road, with foam frothing in her mouth, as vehicles ply around her without a care to stop. We see a mask  appear on her face, as she becomes some sort of a village spirit, that only Karnan's grandfather can see in his dreams. However, while the masked girl makes occasional appearances, creating some haunting imagery, the connection is never explored later. Karnan Review: Dhanush’s Film Declared a Megahit by the Audience.

Speaking of imagery, there is plenty of that in the movie, mostly portrayed through animals that say a lot about the mood of the village, and of its hot-headed protagonist. In the beginning we see an eagle fly off with a chick, leading to its owner and her neighbours cursing the predator. This prompts Karnan to ask his maternal grandfather Yeama Raja (Lal), who is also a friend figure to him, why the villagers haven't got used to it yet. From establishing about oppression in this scene, to later a donkey getting the ropes that bind him from escaping being cut off (by Karnan), the messaging about gaining freedom from societal bindings can't get any clearer.

There is nary a doubt that Selvaraj is quite inspired by Mahabharata, not just in inserting themes from the epic but also literally borrowing character names. There is Draupathi (Rajisha Vijayan), a girl in the same village who has a crush on Karnan, while her brother Vadamalaiyan (Yogi Babu) dislikes him. The village head is Duriyodhanan (GM Kumar), who like his namesake, takes a liking for Karnan.

The antagonist, a police superintendent called Kannabiran (cinematographer Natarajan Subramaniam making an excellent acting debut), whose name refers to Lord Krishna. But the names are not merely borrowed. In a troubling scene, Kannabiran tortures some of the villagers for the audacity to naming themselves after the kings. While the caste hierarchies of the characters are never mentioned outright, you really don't need that knowledge to understand the gravitas of the scene.

Mahabharata seems not the only epic that has inspired the director. Karnan's first heroic scene involves a sword and a lake, after which he begins to get hailed in his hamlet. A couple of scenes later, a village boy brings a horse to take care of. Everything is set for Karna to be that knight in armour coming to rescue his kin. There is some heavy influence of the fable of King Arthur in there.

All you wait is for the protagonist to explode, his temper and frustration at the system ignoring their needs already on a high, and when that happens, it is effectively volatile. Be it the strong mid-point sequence where Karnan demolishes a bus, or the attack at the police station or the brutal third act, Selvaraj refuses to temper the anguish of the lead.

But the anguish is supplanted by much warmth too, which makes the brutality even more difficult to watch. Karnan's scenes with his sister and thatha are heartwarming, and Dhanush's camaraderie with Lal is very nice. A little disappointment comes from the romantic subplot between Karnan and Draupathi, that's mostly standard fare, and Rajisha Vijayan really doesn't get much scope here.

Sorry to get to comparisons here, but one big reason I was annoyed with Master earlier this year is that director Lokesh Kanagaraj had to compromise on his craft to match upto his leading star's superstardom. Here's where Mari Selvaraj does better. He gives a gripping saga that doesn't dilute its message, while also adhering on Dhanush's superstar image (Come on, this man is unbeatable throughout the movie). Even when Karnan gives its star enough massy appeal, it is grounded and comes with painful baggage. The movie never fails to remind that the violence comes with its consequences - no matter how righteous it is - and even the protagonist can't escape it. There is nothing best to describe the aspect than the scene of Karnan dancing with tears streaming from his eyes in the finale.

Karnan never goes beyond the environs of its rustic setting, yet Theni Eswar's striking cinematography manages to give it the feel of a magnum opus. The appeal gets even more powerful by Santhosh Narayanan's rousing score and Selva RK's sharp editing.

Finally, a paean for the star. Dhanush's magnifique quality of getting smoothy imbibed into his character once again gives him another powerful role. Like with Fahadh Faasil, there is something immensely magnetic about his eyes, that the actor puts to incredible use in the more terse sequences. Karnan should bring more awards to this brilliant performer.

(The above story first appeared on LatestLY on May 14, 2021 01:09 PM IST. For more news and updates on politics, world, sports, entertainment and lifestyle, log on to our website latestly.com).