Master: Setback for Thalapathy Vijay Fans in Kerala! Theatres To Not Reopen in the State For This Reason

Are you the one who was excited to watch Thalapathy Vijay's much-anticipated film, Master in theatres on January 13, 2021? Well, we are sorry to inform you that you will not be able to do so. Check out the full story inside. 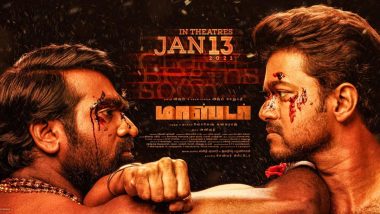 Are you the one who was excited to watch Thalapathy Vijay's much-anticipated film, Master in theatres on January 13, 2021? Well, we are sorry to inform you that you will not be able to do so. Why you may ask? As per the latest reports doing rounds, theatres are not opening in Kerala. Reportedly, the exhibitors strongly feel that if the state government is not helping them with a package for services such as free electricity charges and tax waiver, there is no point. Further, the distributors have their own set of demands. They are only willing for the cinema halls to open if the exhibitors clear their pending dues. Kerala Theatre Owners Seek Reduction in Fixed Charges of Electricity And Entertainment Taxes From Govt to Sustain Financial Loss Due to Lockdown.

Well, this makes us wonder that as Master is releasing in cinemas almost within a week, what will be its fate. In a nutshell, it means until and unless the demands made by both the parties is not full-filled, Thalapathy's film's release is at stake. It was today when the makers had shared a fresh teaser from Master and now we hear this news about Kerala theatres. Fact Check: Thalapathy Vijay's Master Posters Suggesting its Premiere on Amazon Prime are Fake.

#KeralaFilmChamber the apex body of #Malayalam producers, distributors and exhibitors has decided to open cinemas only after receiving a “financial package” from #Kerala govt! https://t.co/qeP3sOuIHz

Contrary to this, earlier reports were that Kerala's government have decided to open the big screens from January 5. Helmed by Lokesh Kanagaraj, Master also stars Vijay Sethupathi, Malavika Mohanan, Andrea Jeremiah, Shanthanu Bhagyaraj and Arjun Das in pivotal roles. In the flick, Vijay is said to essay the role of a college professor. Stay tuned!

(The above story first appeared on LatestLY on Jan 06, 2021 05:01 PM IST. For more news and updates on politics, world, sports, entertainment and lifestyle, log on to our website latestly.com).