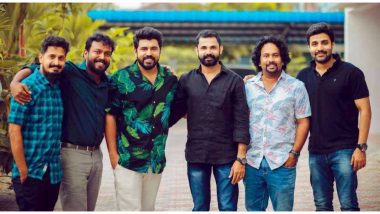 Malayalam actor Nivin Pauly took to his social media pages and shared a heartfelt note thanking his fans and the industry. The actor has completed ten years in films. Yes, it's been ten years since Nivin made his debut with Malarvadi Arts Club and blessed us with screen presence. The movie was directed by Vineeth Sreenivasan. The worked hard and took unlikely roles to establish himself as not just a bankable hero but a commendable artist. Moothon: Recapping Nivin Pauly’s Stunning Evolution From an Angry Young Man in Malarvadi Arts Club to His Riskiest Role in Geetu Mohandas’ Film!

Nivin wrote in his post, overflowing with gratefulness, "It’s been 10 years since the day my first film #MalarvadiArtsClub hit the theatres. Even before I knew it, the most beautiful phase of my life in Cinema had begun. The last 10 years was never easy. It was a journey filled with a lot of emotion and most importantly determination to become an actor. Success comes with failures and I have seen that in the last 10 years," Moothon Movie Review: An Enigmatic Nivin Pauly Stuns You With a Career-Best Act in Geetu Mohandas’ Haunting Sophomore Film.

"My directors starting with Vineeth who introduced me to the world of cinema, Alphonse gifting the magic wand and to every filmmaker who took all the efforts to bring the best out of me. To all the producers who believed in me. I want to thank each one of you today! (sic)," he added.

Vineeth was also emotional today, as Malarvadi Arts Club was his first film as well. The filmmaker also shared a note on Facebook, with a screenshot of a video call with the actor and primary crew members.

He wrote, "thank you Dileep etta for producing my first film.. thanks to my direction department, Prajith ettan and team, thanks to all the actors and technicians I have worked with ever since then.. Thank you Vinod etta for being with me and guiding me.. I don’t know how to express what i feel about achan.. If I am able to write my films today, it’s because of what he taught me, (sic)"

10 years since Malarvadi released.. thank you Dileep etta for producing my first film.. thanks to my direction...

Nivin Pauly was last seen in Moothon, which was directed by Geetu Mohandas. Nivin and Vineeth will reunite for Smart Boys, which is scheduled to release later this year.

(The above story first appeared on LatestLY on Jul 16, 2020 06:41 PM IST. For more news and updates on politics, world, sports, entertainment and lifestyle, log on to our website latestly.com).