Padavettu, directed by Liju Krishna, will feature Nivin Pauly and Aditi Balan in lead roles. The film will be produced under the banner of Sunny Wayne Productions, marking actor Sunny Wayne’s debut as a producer. 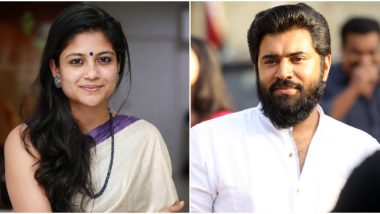 Aditi Balan started her acting career in Kollywood and her debut film was Aruvi. Her role was critically acclaimed and after that she has not done any films. Aditi is now all set to make her debut in Mollywood. She has been roped in the upcoming Malayalam film titled Padavettu, in which she has been paired opposite the charming actor, Nivin Pauly. On December 3 the young actress confirmed the news across social media platforms. Padavettu: Nivin Pauly Shares the First Look of His Upcoming Film - Read Details.

Aditi Balan shared a picture in which she is seen posing with Nivin Pauly. She captioned it as, “To new beginnings in a new place. ‘Padavettu’ directed by debutant Liju Krishna shooting starts today!! Need all your prayers and blessings as always!! Excited and thankful to be a part of this project along with some amazing talents!!! @nivinpaulyactor @liju_krishna @sunnywayn @govindh001”. After watching her stellar performance in Aruvi, we just cannot wait to watch her in Padavettu’.

Aditi Balan who is doing a film almost after two years also shared in another post, “Starting a new project after almost 2 years. I am filled with so much excitement, fear, curiosity and happiness. It has definitely been a long wait during which my life has had a lot of ups and downs. Irrespective of all of that , I ve really grown to be much stronger than before. I have realised one thing during the wait , people will have a lot of opinion about you and people will say 100 things. People will call you arrogant without knowing you. People will call you to be vulnerable but only you as person will know what it really is and what exactly is the journey you are in. Somewhere I had started to worry about the outcome of a project. Yes i worried about it and was not being stuck up. Things changed so quickly after the release of Aruvi nevertheless a change I learnt to handle with time irrespective of it being good or bad. At the end of the day , final outcomes were and will never be in your hands. The most I can do is to give everything I can and do the best.”

Aditi Balan also mentioned, “At this point of time , I must really thank the entire team of Aruvi to whom I'll eternally be grateful. My knowledge of films started there but there is a long long way for me to go and to learn a lot more. I need all your blessings and prayers. @arunprabu_p , Anjali akka @pakkiyarajkothai @shelley_calist @prabhu_sr @yeshwanth_zg @bindhumalini @vedanth_bharadwaj Lastly ,all the love people have given me from all corners made me who I am today and I'll need all your prayers and blessings in the future to keep me going.”

Padavettu, directed by Liju Krishna, will also feature Shine Tom Chacko and Shammi Thilakan in key roles. The film will be produced under the banner of Sunny Wayne Productions, marking actor Sunny Wayne’s debut as a producer. Stay tuned for further updates!

(The above story first appeared on LatestLY on Dec 04, 2019 04:31 PM IST. For more news and updates on politics, world, sports, entertainment and lifestyle, log on to our website latestly.com).