Priyadarshan is a popular director, screenwriter and producer who has been in the film industry for more than three decades. Besides helming films in Malayalam and Hindi, he has also directed a few Tamil and Telugu movies. 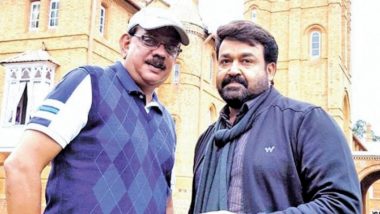 Priyadarshan is a popular director, screenwriter and producer who has been in the film industry for more than three decades. Besides helming films in Malayalam and Hindi, he has also directed a few Tamil and Telugu movies. It was in the early 80s when Priyadarshan had started his career in Malayalam Cinema. He has given the industry some iconic films that every Mollywood movie buff will cherish forever. Many of his films have even been remade in Hindi, especially the comedy ones. His collaboration with superstar Mohanlal has been highly popular. The duo has given some of the most memorable and blockbuster films. Putham Pudhu Kaalai: Kalyani Priyadarshan Shares Experience of Filming for Amazon Prime Movie.

Mohanlal and Priyadarshan have worked together in numerous Malayalam films since early 80s. They were a super-hit combo in the 80s and 90s. Boeing Boeing, Kilukkam, Thenmavin Kombath are some of the popular films. On the occasion of Priyadarshan’s birthday, let’s take a look at some of the evergreen Malayalam films helmed by the director featuring Mohanlal.

Boeing Boeing – This is one of the most popular comedy films based on the 1960 French play of the same name, starring Mohanlal and Mukesh in the lead. It remains one of the cult classic comic capers in Mollywood. The director had remade this movie in Hindi, titled Garam Masala.

Mazha Peyyunnu Maddalam Kottunnu – Written by Sreenivasan, also the veteran actor of Malayalam who has shared screen space with Mohanlal in many iconic films, this movie was was one of the highest-grossing Malayalam films of 1986. Mohanlal played the role of Shambu, a chauffeur. He was Madhavan aka MA Dhavan’s (Sreenivasan) schoolmate, who now works as a driver in his home.

Kilukkam – A musical rom-com, set in Ooty, in which Mohanlal plays the role of a tourist guide and Jagathy as a photographer. Revathi is paired opposite Lalettan in this movie. She pretends to be a mentally unstable girl in order to get a shelter. Even this 1991 released movie is regarded as one of the best comedy films of Malayalam Cinema.

Mithunam – Another cult family drama directed by the ace filmmaker. Even this movie is written by Sreenivasan, who also plays a key role in the film. It showcases how Sethumadhavan (Mohanlal), a simple man, juggles between his ladylove, family and the corrupt officials who always create hurdles for him to establish his biscuit factory.

Thenmavin Kombath – Starring Mohanlal, Shobana and Nedumudi Venu in the lead, this is another classic film written and helmed by Priyadarshan. The movie was not only a blockbuster at the box office, but it even won two National Film Awards for Best Cinematography and Best Production Design.

These are some of the popular films made by Priyadarshan. His upcoming film with Mohanlal is the magnum opus Marakkar: Arabikadalinte Simham, which is all set for a theatrical release on March 26. We wish the iconic filmmaker of Indian Cinema, Priyadarshan, a very happy birthday!

(The above story first appeared on LatestLY on Jan 30, 2021 08:15 AM IST. For more news and updates on politics, world, sports, entertainment and lifestyle, log on to our website latestly.com).