Malayalam actress Rajisha Vijayan has joined the cast of actor Ravi Teja's upcoming film Ramarao on Duty. The actress took to Instagram on Monday to share the news 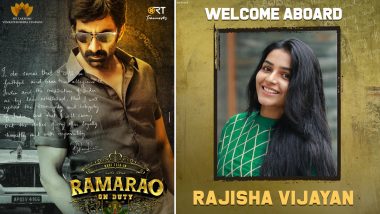 Malayalam actress Rajisha Vijayan has joined the cast of actor Ravi Teja's upcoming film Ramarao on Duty. The actress took to Instagram on Monday to share the news. Ravi Teja’s 68th Film Titled Ramarao On Duty, Check Out The First Look Of The Actor From The Film

Ramarao on Duty will be Ravi's 68th film and is directed by Sarath Mandava. The film will have two leading ladies and had already announced Divyasha Kaushik earlier as one of its heroines. The film will mark Rajisha's debut in the Telugu film industry. Shooting has commenced for the project.

On Instagram, Rajisha put up a picture of the announcement poster and captioned it: "Extremely elated to announce my Telugu debut with @raviteja_2628 garu. Directed by @sarath.mandava sir."

Ramarao On Duty is a thriller said to be inspired by true incidents. The film, which is produced by Sudhakar Cherukuri, will have Sam CS compose music. Besides Ravi, Rajisha and Divyasha, the film also stars Nasser, Sr Naresh, Pavitra Lokesh, Rahul Rama Krishna, Eerojullo Sree, Madhu Sudan Rao, Surekha Vani amongst others.

Ravi's first look in the film was highly appreciated by the fans. He was seen in a police uniform standing next to a government police car. The actor will also be seen in Ramesh Verma's "Khiladi", which has just resumed shooting.

(The above story first appeared on LatestLY on Jul 19, 2021 09:49 PM IST. For more news and updates on politics, world, sports, entertainment and lifestyle, log on to our website latestly.com).