The poster presents Sushanth in a fierce look. Though the makers of the Ravi Teja-starrer are keeping the details of Sushanth's character close to their chest 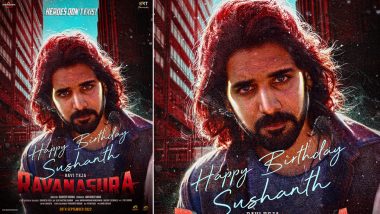 Sushanth Anumolu, who has appeared in movies such as 'Kalidasu' and 'Chi La Sow', was last seen alongside Allu Arjun in Ala Vaikunthapurramuloo. The actor will now essay a "dynamic role" in Ravi Teja's much-anticipated next movie, 'Ravanasura', and as Friday is his birthday, the film's makers released a poster featuring him. Ravanasura: Ravi Teja and Team Wrap Up Second Shooting Schedule of the Action-Thriller.

The poster presents Sushanth in a fierce look. Though the makers of the Ravi Teja-starrer are keeping the details of Sushanth's character close to their chest, he looks intensely into the camera in the poster with long hair, blue eyes and beard. Ravi Teja’s Ravanasura Goes on Floors, Actor Confirms the News With a Group Selfie!

Sushanth, an electrical engineer-turned-actor, is the grandson of the Telugu cinema icon Akkineni Nagewara Rao and nephew of the superstar Nagarjuna. Sudheer Varma is directing the movie under the banners of RT Team Works and Abhishek Pictures. The movie is slated for release on September 30 this year.

Ravi Teja, popularly known as the 'Mass Maharaja', will play a lawyer in the action drama. He will also be seen essaying the lead role in 'Dhamaka', 'Rama Rao On Duty' and 'Tiger Nageswara Rao', which are in different stages of production.

(The above story first appeared on LatestLY on Mar 18, 2022 09:22 PM IST. For more news and updates on politics, world, sports, entertainment and lifestyle, log on to our website latestly.com).