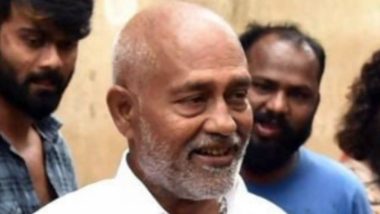 Noted Kannada comedian Rockline Sudhakar breathed his last on September 23, 2020 after he succumbed to a cardiac arrest while shooting in Bengaluru. Sudhakar was on the set of his film Sugarless, when he collapsed. He was rushed to the Fortis Hospital where he was brought dead, a report in The News Minute read. The actor is well known for his roles as both a villain and a comedian in the Kannada film industry. His demise has come as a shock to many. Babu Sivan Dies At 54: Director Of Thalapathy Vijay Starrer Vettaikaaran Passes Away Due to Kidney Failure.

The report mentioned that according to Sugarless’ Production Controller Naresh, 'Sudhakar was with his makeup artist and was prepping for the shoot when he suddenly collapsed. The shoot was taking place in Bannerghatta and he was rushed to Fortis Hospital, where he was declared brought dead.' Telugu Actor Jaya Prakash Reddy Dies At 74.

The Karnataka Film Chamber of Commerce President DR Jairaj, however, revealed that Sudhakar had tested positive for COVID-19, some three months ago. “He had an existing heart condition and the doctors said that he suffered a cardiac arrest. He was brought dead to the hospital. He acted in so many films and may his soul rest in peace,” Jairaj said. Our condolences are with Sudhakar's family.

(The above story first appeared on LatestLY on Sep 24, 2020 05:15 PM IST. For more news and updates on politics, world, sports, entertainment and lifestyle, log on to our website latestly.com).