Sarkaru Vaari Paata: Mahesh Babu Announces The Title Of His Film With Director Parasuram With This Intriguing Poster!

Mahesh Babu’s film with Parasuram has been titled as Sarkaru Vaari Paata! The announcement has been made on the occasion of the actor’s father’s birthday, evergreen superstar of Telugu Cinema, Krishna. 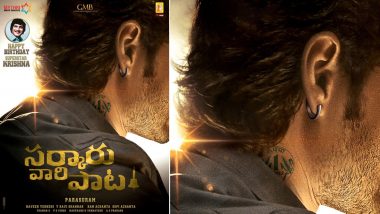 It was known to all that Mahesh Babu is teaming up with Geetha Govindam director Parasuram. But all were just waiting for the official announcement, and here it is! The much-awaited update is here and that too on the special occasion. Mahesh Babu’s film with Parasuram has been titled as Sarkaru Vaari Paata! The announcement has been made on the occasion of the actor’s father’s birthday, evergreen superstar of Telugu Cinema, Krishna. The actor has not just announced the title, but also shared an intriguing poster. Mahesh Babu Extends Birthday Wishes To His ‘Nana’, Evergreen Superstar Krishna, With This Heartwarming Post!

This poster of Sarkaru Vaari Paata just gives a glimpse of Mahesh Babu, but not does not reveal his complete look. He is shown in a bearded avatar, with his ear pierced with an earring. It seems to be more of rough and tough look. You’d also notice a tattoo inked on the side of his neck and it is the symbol of rupee one coin. While sharing the poster and announcing the title, the actor captioned it as, “Here it is!!! #SarkaruVaariPaata Blockbuster start for another hattrick”. Mahesh Babu To Announce About His Next Telugu Film On May 31?

It is known to all that Mahesh Babu makes special announcement on his upcoming projects on his father’s birthday, and this time again he continued the tradition. Fans were eagerly waiting to hear it out and we are sure, this Sunday has turned out to be totally perfect. It was just a few days ago when reports of title leak of this project had hit the internet.

The music of Sarkaru Vaari Paata is composed by Thaman S. This project is bankrolled under the banner of GMB Entertainment, Mythri Movie Makers and 14 Reels Plus. The makers haven’t announced the film’s release date.

(The above story first appeared on LatestLY on May 31, 2020 09:20 AM IST. For more news and updates on politics, world, sports, entertainment and lifestyle, log on to our website latestly.com).