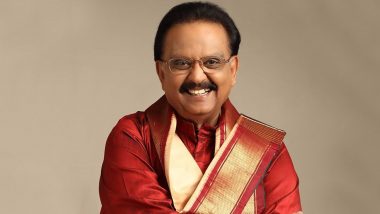 Chennai, Sep 26: Tamil Nadu Chief Minister K Palaniswami announced that the mortal remains of famous playback singer and Padma awardee SP Balasubrahmanyam, popularly known as SPB or Balu in the cine world and who recorded over 40,000 songs in 16 languages over a period of five decades, will be laid to rest with full police honours to add to his fame and glory as he had found a place in the hearts of the people across India. RIP SP Balasubrahmanyam: Karnataka Assembly Pays Tribute to the Legendary Singer by Observing One-Minute Silence in the House.

SPB’s son SP Charan on Friday afternoon confirmed the demise of the legendary singer. Speaking to the media outside the MGM Healthcare Hospital, he said Balasubrahmanyam passed away at 1:04 PM and thanked the hospital officials for the treatment and service.

The singer's body was taken to his residence after embalming for public homage in the evening. A large number of people gathered at his residence here to have a last glimpse of the singer and pay their respects. Later in the evening his body was taken in a van to his farmhouse at Thamaraipakkam near here where the last rites will be held. Enroute several people stood on the pavement and bade SPB a tearful goodbye.

Earlier MGM Healthcare in a statement said: “In a further setback this morning, despite maximal life support measures and the best efforts of the clinical team, his condition deteriorated further and he suffered a cardio-respiratory arrest. With profound grief, we regret to inform that he has passed away on September 25 at 13.04 hours.” The hospital said, Balasubrahmanyam was on life support measures since August 14 for severe COVID-19 pneumonia.

On August 5, in a Facebook post, the 74-year-old SPB said that he was suffering from a very mild attack of coronavirus and had got himself hospitalised to take rest. He had said that though the doctors had advised him to stay at home and take rest, he decided to be in a hospital, as at home his family members would get concerned. He hoped to get discharged from the hospital in two days. But it was not to be. For a brief period, he showed some improvement in his health condition and had tested negative for coronavirus on September 4. But on Thursday the hospital said his condition was extremely critical. Since Thursday the indications about Balasubrahmanyam were not good. SP Balasubrahmanyam No More! Here Are Five Unknown Facts About The Legendary Singer That You Should Always Remember.

On Thursday MGM Healthcare said the singer remains on ECMO and other life support systems. "His condition in the last 24 hours has deteriorated further warranting maximal life support and he is extremely critical. The team of experts at MGM Healthcare are closely monitoring his health condition," the hospital had said.

Since Friday morning a large number of police personnel were deployed outside the hospital. The singer's family members were present at the hospital. Director Bharathiraja, after visiting the iconic singer at the hospital, told the media at this time of grief he was not able to say anything.

Actor Rajinikanth tweeted: "Balu sir ... you have been my voice for many years ... your voice and your memories will live with me forever ... I will truly miss you ..." "I have no words to say. There can be one and only Balu Sir. I have sung a couple of songs with Balu Sir in Tamil movies. In those days the recording used to be live and it was interesting. He encouraged me a lot. Some months back I had met him. He enquired about my family and me," playback singer Jency told IANS from Ernakulam in Kerala.

(The above story first appeared on LatestLY on Sep 26, 2020 10:29 AM IST. For more news and updates on politics, world, sports, entertainment and lifestyle, log on to our website latestly.com).