Suriya Attends A Fan’s Wedding Ceremony And Netizens Can’t Contain Their Happiness Seeing His Presence At The Event! (View Pics)

Suriya, dressed in a simple outfit, flaunting his new look for his next project, was seen attending a wedding ceremony of one of his fans. 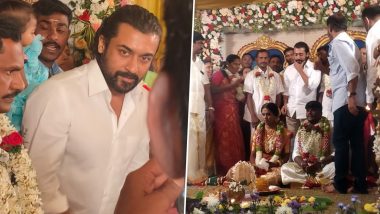 Suriya has fans all over the world and they wait to watch him on the big screens. He has won hearts not just with his performances on the big screen, but even with his sweet gestures he has won his fans’ hearts even off screen. The actor has always done the needful for his fans and once again he has done something special leaving netizens amazed. Suriya’s pictures are going viral across social media platforms. It is because he has attended a wedding ceremony of one of his fans and seeing his presence at the event, netizens can’t contain their happiness. Suriya’s Photos From Soorarai Pottru Director Sudha Kongara’s Daughter’s Wedding Go Viral! Fans Impressed With His New Look.

Suriya, dressed in a simple outfit, flaunting his new look for his next project, he was seen attending a wedding ceremony. He also wore a face mask during the event. It is a wedding ceremony of one of the names named Hari, who handles the actor’s fan page on Twitter, @Hari_AISFC. It is All India Suriya Fan Club where one will find the latest updates on the Kollywood star’s upcoming films and other key details. Take a look at the pictures of Suriya that have been going viral. Priyanka Arul Mohan To Be The Leading Lady In Suriya 40?

Suriya's Love For All His Fans

All Praises For Suriya

He loves his fans unconditionally. No one can do this for fans but Suriya Annan is always there for fans !

On the work front, Suriya was last seen in Soorarai Pottru that had released on Amazon Prime Video. The actor has teamed with director Pandiraj for a film that is tentatively titled as Suriya 40. He has also collaborated for film titled Vaadivasal that will be helmed by Vetrimaaran.

(The above story first appeared on LatestLY on Jan 25, 2021 09:37 AM IST. For more news and updates on politics, world, sports, entertainment and lifestyle, log on to our website latestly.com).