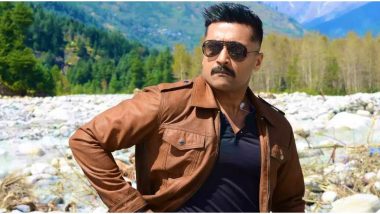 For the ones who are unaware, Suriya's Kaappaan revolved around locust invasion, a phenomenon that's currently wreaking havoc in the northern states of India. Locusts are known for destroying hectares of croplands and currently, they are infecting some major farms across Rajasthan, Madhya Pradesh and Gujarat. Suriya fans are busy hailing the actor's futuristic movie that predicted this event and its director KV Anand revealed how Maattrraan indirectly helped him highlight this subject. Four Years of #24TheMovie and Suriya Fans Call This Film As Their All-Time Favourite!

When India Today got in touch with the director to interact about how he got the idea of locust invasion for Kaappaan, he said, "I visited Madagascar nine years ago for the pre-production work on Suriya's Maattrraan. I was on location-scouting. While I was travelling in a car with my team, I saw thousands of locusts approaching us. It became difficult for us to drive and we had to stop for hours for it to get cleared. That's when I inquired about them to a local resident there and gathered a lot of details. Later, I incorporated the idea in my film Kaappaan."

Explaining how history will repeat itself, the director further added,  "I also did extensive research on the subject before working on Kaappaan. There are a lot of references in the Bible and the Quran on locust invasion. In fact, locusts played a major role in migration and other changes in civilisation. The worse part is that these insects can attract a lot of rats and can indirectly spread disease. Mumbai became the victim of a locust attack in the period of 1903 to 1906. History will always repeat. We have to act fast and control it." Suriya to Turn 45 on July 23, but Fans Trend #PhenomSURIYABdayIn100D and Start the Celebrations on Twitter Much In Advance.

Memes on locust invasion and Kaappaan are now going viral on the social media but the director insists he can't be happy about it. Many Indian states are currently battling this attack while others are prepping to tackle their invasion.

(The above story first appeared on LatestLY on May 28, 2020 02:08 PM IST. For more news and updates on politics, world, sports, entertainment and lifestyle, log on to our website latestly.com).