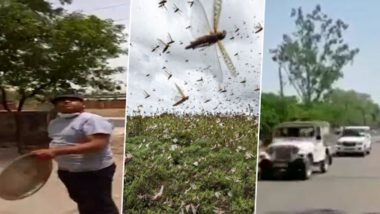 Rajasthan, May 28: Locusts also known as 'tiddi dal' have been creating havoc across several states in India. The states that have been majorly hit by the swarm of insects are Rajasthan, Madhya Pradesh, Punjab, Haryana and Maharashtra. A lot of other states have been asked to be alert and keep a watch on the insects. It is being reported that the locust invasion this time is one of the worst tiddi attacks in nearly three decades.

The entry of the locusts has left the farmers hassled because these short-horned grasshoppers destroy crops and they can travel up to 130 kilometres in a day and each locust can consume two grams of vegetation which is equivalent to its weight. Over the last few weeks, people were seen resorting to various ways to scare the locusts. From banging utensils to using police sirens, people are trying all desperate measures to scare the locusts. Locust Attack: What Happens When This Pest Invades Farms? Know All About The Worst-Ever 'Tiddi Dal' Attack as Fear Grips Farmers in Rajasthan, Gujarat, Punjab and Other Indian States.

People, including farmers, are spotted banging utensils in order to scare away the swarm of desert locusts. On Wednesday, UP Chief Minister Yogi Adityanath directed 14 district administrations to remain alert to swarms of locusts and asked people to bang thalis and drums to ward off a swarm of locusts.

#WATCH Rajasthan: People bang utensils in order to scare away the swarm of desert locusts, a type of a species of short-horned grasshoppers, which flew across Dholpur district yesterday. pic.twitter.com/O8cFBfVdYk

The district administration in Panna in Madhya Pradesh was seen using police sirens to scare away the swarms of locusts.

Police Sirens being used to Create Noise and Scare Away locusts

#WATCH Madhya Pradesh: Swarms of locusts being scared away by the district administration in Panna, using police sirens yesterday. pic.twitter.com/rEcXXsMXq1

UP police officer Rahul Srivastava posted a video in which farmers can be seen using a vehicle fitted with loudspeakers to scare away locust swarms.  He further said, "You can take recourse to not only DJ but any kind of sound".

DJ Music Being played to Drive Away Locusts, Watch Video:

Drones Are Being Used to Fight Tiddi Attack:

In order to tackle this menace, drones are being used in Rajasthan and Madhya Pradesh to spray insecticides to kill the locusts. Rajasthan recently used the first batch of tailor-made drones given by the Union Ministry of Agriculture. The operations started in Samod village in Chomu.  The drones have been designed to spray 10 litres of chemicals along with creating a sound that could scare the locust. These drones will help to reach the tall trees and other inaccessible areas where the locusts rest.

Tiddi dal is usually seen from June to November, and this is for the first time that they have entered the country earlier. Also, an unusual behaviour seen this time is desert locusts are seen either solitary or in small groups, which means that such swarming which is taking place this time is highly unusual.

The Ministry in a statement on Wednesday mentioned about 21 districts in Rajasthan, 18 districts in Madhya Pradesh, 2 districts in Gujarat and 1 district in Punjab have undertaken locust control measures till now.

(The above story first appeared on LatestLY on May 28, 2020 12:59 PM IST. For more news and updates on politics, world, sports, entertainment and lifestyle, log on to our website latestly.com).