Sye Raa Narasimha Reddy: Amitabh Bachchan's New Poster Will Get You Excited for the Film's Trailer Launch on September 18, 2019

Amitabh Bachchan's mighty avatar in Sye Raa Narasimha Reddy's new poster will get you excited for the film's trailer launch. While we loved its teaser and it sure looked promising, we are dying to see what the trailer has in store for us. 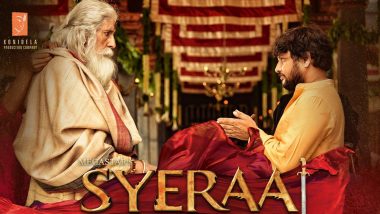 Chiranjeevi is currently gearing up for his next big release, Sye Raa Narasimha Reddy that's been bankrolled by his own son, Ram Charan. The historical drama that also stars Amitabh Bachchan, Vijay Sethupathi, Kiccha Sudeep, Nayanthara and Tamannaah in pivotal roles will hit the screens on October 2, 2019. While its teaser looked promising, we are patiently waiting for its trailer release that will hit the screens on September 18, 2019. But this new poster of Amitabh Bachchan is making the patience in us turn into impatience.

Amitabh Bachchan's mighty avatar in this new poster is making us eager beaver for the film's release. Though reports suggest that he has a cameo appearance in this period drama, we bet it will be impactful enough. Imagine seeing two megastars share the same screen space. Chiranjeevi and Amitabh Bachchan coming together for a project is a big thing in itself and the storyline makes it the entire experience a lot more interesting.

Check out the poster below

Sye Raa Narasimha Reddy revolves around India's forgotten freedom fighter, Uyyalawada Narasimha Reddy, who revolted against the British. It would be interesting to read this undiscussed chapter of history and we hope it turns out to be as stellar as Baahubali. The movie will clash with Hrithik Roshan and Tiger Shroff's War on October 2, 2019.

(The above story first appeared on LatestLY on Sep 15, 2019 06:44 PM IST. For more news and updates on politics, world, sports, entertainment and lifestyle, log on to our website latestly.com).