Taapsee Pannu Birthday: 5 Best Tamil Films Of The Actress That You Must Watch! 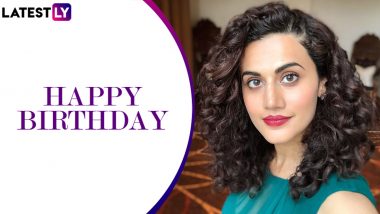 Taapsee Pannu is a brilliant actress. Be it any role, she has delivered it with absolute perfection. Taapsee is beautiful, graceful and one of those actresses who does not fear to experiment with her roles. Born to Dilmohan Singh Pannu and Nirmaljeet, this lovely actress must be widely known for her works in Hindi Cinema. But you’d be surprised to know that she is also popular down south. Taapsee had made her acting debut with a Telugu film and went on to do Tamil and Malayalam films as well. Taapsee Pannu Birthday Special: From Being Called A Jinx To Being Hailed This Gen's Shabana Azmi, How Thappad Actress Evolved Over The Last Decade!

Today, August 1, Taapsee Pannu celebrates her 33rd birthday. Her fans across the country have been showering her with tons of love and good wishes on social media platforms. The world of cinema is undoubtedly lucky to have such a talent like her. On this special day, let’s take a look at some at those five best Tamil films that featured Taapsee.

Aadukalam - Taapsee Pannu had made her debut in Kollywood opposite Dhanush with the action thriller Aadukalam. Set in the backdrop of Madurai, she essayed the role of an Anglo-Indian girl who falls in love with a rural man. This movie had not only opened to positive reviews, but also won six awards at the 58th National Film Awards.

Arrambam - In 2013, Taapsee Pannu was featured in a mega budget action drama in which she was seen alongside Thala Ajith, Nayanthara and Arya. Directed by Vishnuvardhan, this movie was huge hit at the box office.

Kanchana 2 - The horror comedy written and directed by Raghava Lawrence and who also seen in dual roles, was horror comedy flick. It was the third installment in Muni series and Taapsee Pannu plays a key role in the film. She plays the character Nandini who works for a TV channel.

Game Over - It was bilingual film, Tamil and Telugu, directed by Ashwin Saravanan. Taapsee Pannu plays the character Swapna, who is single and a talented game designer. She is seen as a wheelchair-bound woman who is trying to defend her home from a mysterious intruder.

These are some of the best Tamil films featuring Taapsee Pannu. Here’s wishing the actress tons of love and good wishes and many more amazing projects in the future. Happy Birthday, Taapsee Pannu!

(The above story first appeared on LatestLY on Aug 01, 2020 09:58 AM IST. For more news and updates on politics, world, sports, entertainment and lifestyle, log on to our website latestly.com).