The Priest To Release In Theatres On March 4; Here’s Why This Malayalam Film Is Special For Mammootty, Manju Warrier’s Fans!

Malayalam superstar Mammootty has announced the release date of his upcoming film titled The Priest that is written and directed by Jofin T Chacko. 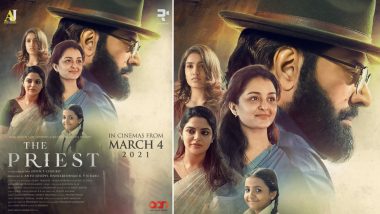 Malayalam superstar Mammootty has announced the release date of his upcoming film titled The Priest. Touted to be a mystery thriller, the film has already seen several delays owing to the coronavirus pandemic. It was initially scheduled to be released in theatres on August 2020 and then it was postponed to February 2021. But now the makers have confirmed that this Mammootty and Manju Warrier starrer is all set to hit the theatres on March 4, 2021. The Priest Teaser: Mammootty and Manju Warrier’s Thriller Raises Intrigue Level With Its Goosebumps-Inducing BGM.

There is a month left for The Priest to release and Mammootty, Manju Warrier fans cannot wait for it. This Malayalam film is extremely special for all their fans as it is the first time ever that Mammootty and Manju would be sharing screen space. It has been so many years since the two have been in the industry but have never worked together. And since the I&B Ministry has announced that the theatres, cinema halls and multiplexes have been permitted to operate with 100% occupancy, this has indeed turned out to be a bonanza for all fans. The Priest First Look: Superstar Mammootty’s Avatar in a Brown Cassock, Reading a Bible, Will Leave You Asking for More About This Flick.

Written and directed by Jofin T Chacko, The Priest is jointly bankrolled by B Unnikrishnan and Anto Joseph. Rahul Raj has composed the film’s music and Akhil George has handled the cinematography.

(The above story first appeared on LatestLY on Feb 02, 2021 02:15 PM IST. For more news and updates on politics, world, sports, entertainment and lifestyle, log on to our website latestly.com).