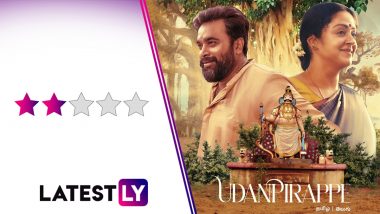 Udanpirappe Movie Review: Era Saravanan's Udanpirappe happens to be its lead star Jyothika's 50th film. So it has be special, right? Ever since Jyothika made her comeback with 36 Vayadhinile (which gets a nod here), the actress has been taking on author-backed roles that display her acting prowess aplenty, even if some of the films don't really live up to it. Case in point -  Ponmagal Vandhal. Udanpirappe: Sasikumar and Jyotika’s Village Drama To Arrive on Amazon Prime Video on October 14!

In Udanpirappe, she gets a kickass intro scene, where she emerges from a water-logged field, carrying a golden statue with her. With such a mass intro scene, we expect Jyothika to be the heart, soul and body of the film. Heart and soul she is, but Udanpirappe isn't about her only.

It is a sibling bonding story wrapped around a family drama, and sprinkled with village politics and a crime angle. The focus is on Maathangi (Jyothika) and her elder brother Vairavan (Sasikumar), who are not on talking terms anywhere, even though they want to break this barrier of cold silence. The reason for not being able to do so is Maathangi's husband Sargunam (Samuthirakani), the soft-spoken local schoolmaster, who is a stickler for rules and wants issues to be solved legally.

He is irked that his brother-in-law goes by the rule of the fist to solve the issues of their village, and Maathangi is caught in this cold war between the two men. She expects the union of her daughter (Nivedhithaa Sathish) and Vairavan's son (Sidhaarth KT) to solve the crisis. But a tragedy soon strikes that further deepens the rift between the already fractured family.

Udanpirappe begins with two kids falling into a well and drowning in a way science can never explain. We return to that scene later, now in a more expanded form in a flashback sequence. It is supposed to be a very emotional moment for a principal character - a kind of a Sophie's Choice - but the way the whole sequence is shown laughably atrocious, be it the CGI used or how the actors perform in that scene.

Considering that it provides the reason why certain characters are acting coldly with each other, I wish the makers would have chosen a better way to depict that scene, instead of trying to add the kind of special effects we saw back in the '90s.

But hey, maybe who knows, it could be deliberate. For in terms of the plot, the treatment and the tone, Udanpirappe is something straight out of the '90s. Or maybe not. Maybe it is aimed at the audience who love to watch soap operas on television, that feel like they are still stuck in the '90s. Ponmagal Vandhal Movie Review: Jyothika’s Fiery Performance Breathes Life Into This Half-Baked Courtroom Drama.

Whatever the case is, Udanpirappe belongs to the old-school tearjerker territory, that begins with a clutter of scenes where we try to connect the dots of what's happening and who's who. Once things settle down, Udanpirappe does get better. I don't might the old school stuff; I have grown up watching those kind of mushy family dramas. So the scenes between Maatangi and Vairavan, and their yearning to be united did connect with me. Those portions have heart, and both Jyothika and Sasikumar have performed well in their roles which makes it easier to feel touched by their sibling bonding.

There are some nice touches here and there in the movie, like how  Vairavan's intro scene sees him beating up a bunch of goons for accidentally hitting a dog with their car. A few scenes later, we find that very dog at his house, now in crutches. There are a couple of other scenes that I was invested in, like that hospital sequence where Maatangi helps a poor woman pay for her bills. Or a flashback sequence where Vairavan questions why his community wants him to remarry for lack of a heir, and that same rule not apply to his wife.

For a film that seems stuck in the '90s at least in its tone and treatment, Udanpirappe does try to act woke. And yet this is also a film where the hero slaps his servant out of anger. Or Maathangi, at one point, telling a woman in which era she lives when the latter suggests that her daughter should wed her nephew. Only for the movie to actually make this incestuous romantic pairing happen.

Udanpirappe, however, falters mostly when it refuses to step out of the soap melodrama territory and instead slipping further into tear-jerker arena. Nearly every scene in the latter half sees at least one character in tears, and this includes Soori, though in his case, it was refreshing to see the actor nail the emotional bits, after scoring a few wisecracks.

The third act is the weakest, with the crime angle taking away the attention of the sibling plotline, almost keeping Jyothika to the sidelines. The caricaturish treatment of the main antagonist doesn't help either. The two actors who play the young couple in love falter when compared to rest of the veteran cast

Another major disappointment is how Samuthirakani's character is written. The writing symbolises the scant respect Tamil cinema has for the lethargic law of the land. Sargunam's disciplned attitude towards respecting the law should have made a nice conflicting contrast against Vairavan's rowdy ways, and yet the former is treated in a very irksome manner, almost funny (unintentionally) in places and boring in other instances.

I, however, loved the D Imman's score for the film, with each song blending beautifully into the narrative.

- The Dated Treatment with a Weak Third Act

Udanpirappe has Jyothika impress once again as an actress, and yet for it being her fiftieth film, the movie is a major letdown with its melodramatic treatment and stretched screenplay. Udanpirappe is streaming on Amazon Prime Video.

(The above story first appeared on LatestLY on Oct 14, 2021 09:51 AM IST. For more news and updates on politics, world, sports, entertainment and lifestyle, log on to our website latestly.com).