Pawan Kalyan starrer Vakeel Saab is garnering a positive response at the ticket window. The comeback movie of PSPK has been the biggest opener of the actor's career. As it has reportedly collected Rs 42 crore on its opening day. Read on. 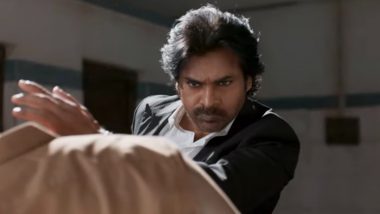 Pawan Kalyan starrer Vakeel Saab is garnering positive response at the ticket window. As the comeback movie of PSPK has been the biggest opener of the actor's career. Fans, as well as critics, are widely appreciating the flick. To note, despite the rising COVID-19 scare in India, audiences are spending their time and money on the South film which speaks volumes about the power of the star. Now, as per early estimates, the courtroom drama has reportedly churned around Rs 42 crore (net Rs 36 crore) in the circuits of Andhra Pradesh and Telangana. Vakeel Saab Review: Pawan Kalyan’s Comeback, Thaman S’ BG Music Impresses Netizens (View Tweets).

Even, trade analyst Taran Adarsh took to Twitter and shared the international figures of the film. While in Australia, the Pawan Kalyan-starrer has earned Rs 84.07 lakhs, in New Zealand, its score is Rs 5.61 lakh. With this, it has defeated the BO collections of Agnyaathavasi, Katamaryudu and Sardaar Gabbar Singh. A few Twitterati also flashed a chart that saw Pawan Kalyan movie’s first-day collection comparison with other big south films. Vakeel Saab Trailer Review: Pawan Kalyan Is Making a Powerful Return to Save Three Innocent Girls From Injustice (Watch Video).

(The above story first appeared on LatestLY on Apr 10, 2021 02:17 PM IST. For more news and updates on politics, world, sports, entertainment and lifestyle, log on to our website latestly.com).