Pawan will also be seen in an action avatar in the movie. A few scenes in the trailer give us a glimpse of him beating up goons and this will only add drama to the movie. 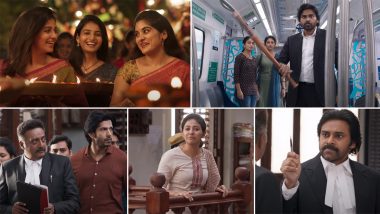 Pawan Kalyan's fans sure missed him on the screen and the actor also made sure that he makes a powerful comeback. He will be seen in Vakeel Saab next and the makers are leaving no stones unturned to raise excitement for the film. The posters of the film and the teaser have already received immense love from the fans and now they have surprised the audience with a powerful trailer. Pawan looks impressive in this courtroom drama and the trailer is only going to make the wait for the film even harder for his fans. Vakeel Saab: Trailer of Pawan Kalyan’s Court Room Drama Will Be Out on March 29.

The film revolves around a case that has been filed against three girls. Pawan will be fighting their case while his opponent Prakash Raj is making sure he does not win the case. The trailer gives you a really impactful glimpse of what is yet to come and is a goosebumps experience to watch it. The three leading ladies - Nivetha Thomas, Anjali, Ananya Nagalla are also looking very impressive in the trailer. We cannot wait to see their camaraderie with the megastar.

Pawan will also be seen in an action avatar in the movie. A few scenes in the trailer give us a glimpse of him beating up goons and this will only add drama to the movie. The dialogues look powerful, the background music is amazing and all in all, the trailer looks quite intriguing.

Pawan Kalyan will be returning to the big screen after a gap of two years with Vakeel Saab. For anyone who is unaware, two years back superstar Pawan had said goodbye to films with an aim to focus on his political career. But when approached by the makers of Vakeel Saab, the actor gave a nod to doing the film. Helmed by Venu Sriram, Vakeel Saab is the remake of the Hindi film Pink that had starred Amitabh Bachchan in the lead role. Vakeel Saab is jointly produced by Boney Kapoor and Dil Raju. Vakeel Saab Trailer: Pawan Kalyan, Sriram Venu’s Court Room Drama Looks Intriguing.

Shruti Haasan is portraying a special role in the film. This movie was initially scheduled to release on May 15 in theatres, but due to the pandemic, the work on the film couldn't be completed and so it got delayed further. But with the release date out, we cannot wait for the makers to finally drop the trailer of the film as well.

(The above story first appeared on LatestLY on Mar 29, 2021 08:01 PM IST. For more news and updates on politics, world, sports, entertainment and lifestyle, log on to our website latestly.com).