Vishwaroopam 2 Trailer: Kamal Haasan and Rahul Bose Stand Out in This Action Thriller That Will Hit the Screens on 10th August 2018 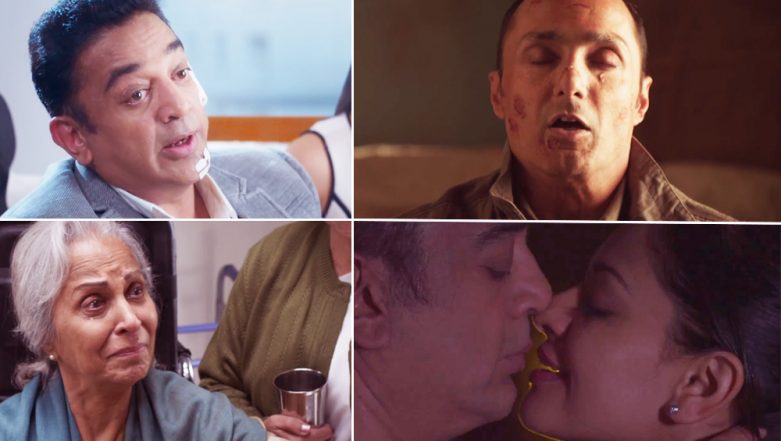 Fans had been excitedly waiting to watch Kamal Haasan come back with Vishwaroopam 2 and the trailer is finally out. If you loved the first installment of the film, you will completely love this trailer. Shruti Haasan released the trailer of the film on her Twitter and Aamir Khan released the Hindi trailer on his social media account. The film went through a lot of controversies, for its political content and issues with the Censor Board. That's usually how Kamal Haasan films role though. CBFC cleared the film with 17 cuts and a U/A certificate. The film will now release on 10th August 2018.

The trailer has a lot of brilliant action sequences and speaks of patriotism. Since this is a sequel to the first film, Kamal will be seen chasing Bose to destroy his plans to stop his attack on New York City. Kamal is known to be one man with many faces in a lot of films. Be it Vishwaroopam or Dasavataram, he portrays every character he plays with utmost perfection. The action sequences in the trailer will take you by surprise. The film will release in Tamil, Telugu and Hindi. The film might play a key role in Kamal Haasan's political career and is already facing some flak from certain religious communities.

Check out the trailer right here.

Aamir tweeted the Hindi trailer and wrote, "Dear Kamal Sir, congratulations to you and to the entire team of Vishwaroop 2 ! Wishing you all the very best. Love and respect always. Aamir." The trailer does seem quite interesting and bold. Waheeda Rehman also plays a pivotal role in the film. Fans are raving about how brilliant this Ulaganayagan's film is going to be. What are your thoughts on the trailer? Tell us in the comments below and stay tuned with us for more.