The Japanese Rapper TOMORO Is Taking the World by Storm 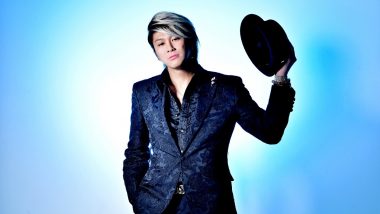 His name has become a universal icon.

He started his own artist activities in 2021 and plans to expand into the world for the first time as a Japanese rapper. It has been decided to release a series of featuring songs with 10  other world-famous artists such as Sean Kingston, Alexandra Stan, Shanice, Fatman Scoop, Nice & Smooth, and recording with them has already started.

TOMORO is the youngest businessman, music producer, and rapper known to have become the Roppongi Hills millionaire . He has appeared on programs such as TBS TV "Sunday Japon" and "Good Luck" as "New generation Business mogul . He is based in Japan and plans to make a full-scale entry into Los Angeles, USA from 2021.

TOMORO has been laying down his musical activities since 2008. So far, he made his major debut with

“LOVE Dokkyun 2 feat. CLUB PRINCE - Roppongi party song -“ from Crown records. also he has collaborated with songs such as Shonosuke Okura (One of the few traditional people in Japan), who performed in front of Queen Elizabeth and the Pope of Rome.

In addition, "PARTY OUT feat. May J." was released in Japan in 2013. In 2015, released "LOVE MY HOOD feat. “Asuka Kirara”. Recently, rapper TOMORO, who ranked #1  as a Japanese artist on the Billboard World Digital Song Sales Chart . TOMORO also

AIKA, which can be said to be the protagonist of this MV played her role I. The video using her naked body as a dish plate this is part of Japanese sexual cultural in Japanese it’s called , "Yakiniku, Nyotaimori, She spoke about the experience shooting this video she was so surprised by the fact of using her naked body as dish plate for yakiniku in the video something rare to see on YouTube MV, but when she she saw the Video after editing, with the gold powder , She thought that it was the coolest thing ever. Aika likes the way it looks on the screen in terms of color and art , " She said on the creative side. Tomoro replied On the other hand, "AIKA-chan, is artistic , so I noticed that kind of thing. Colors!

"TOMORO was puffing shisha on AIKA's body, I also helped to hide her body with shisha smoke. when I saw the the completed MV, there is no scene of shisha smoke at that time (laughs )

But AIKA's attractive body has become a satisfying MV with the fusion of grilled meat and Nyotaimori."

In the conversation with KING TOMORO

After talking with TOMORO seeing his character and determination I felt strongly that this young star has a bright further and We are Looking forward to seeing more of your success In the world !!!