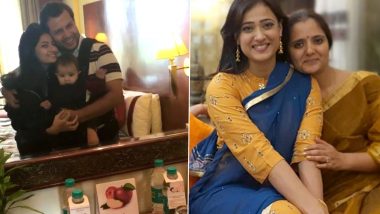 Yet another ugly phase of the whole Shweta Tiwari - Abhinav Kohli - Palak Tiwari controversy has reared its head and blame it all on Abhinav. The actor, a few months back, opened a canned of worms when he said he will reveal how it was Shweta Tiwari who wronged him. He also went on to make claims that he and Shweta were very much together and has been filling up his Instagram feed of how Shweta and Palak have done him wrong and he is the victim here and how he is not allowed to meet his son Reyansh among other things. Shweta Tiwari's Ex Abhinav Kohli Maintains They Are Still Living Together, Says 'We're Not Separated'.

And while his tirade has no stopped and both Palak and Shweta have chosen not to react to Abhinav's statements, Shweta's family friend of 15 years, Anuraddha Sarin who has a production house, went on to reveal that Abhinav is not the victim that he is portraying himself to be. Anuraddha, in a few comments on Abhinav's Instagram, revealed how he would ask step-daughter Palak some inappropriate questions about her virginity, ask her if she has kissed anyone and even alleged that Abhinav had shown Palak pictures and asked her to maintain her figure to have a successful career in the industry. Shweta Tiwari Calls Abhinav Kohli's Claims Of Living Together A 'Lie', Abhinav Claims Shweta Did Not File Any Police Complaint (View Post).

Check Out The Chats Below:

So This is the truth of #AbhinavKohli by witness @anuraddhasarin and close one of #shwetatiwari ..At Loss of words!!! .. Yeh toh bimaar attention seeking joker nikla omg worse than @rajachaudhary .. Yes u should have open communication with ur children but it should be healthy learning about everything even Sex.. Queen @shweta.tiwari U deserve a Real Man not lukkhas like these local level bydefault vain males.

In one of the statements, Anuraddha also revealed an incident that took place at Inorbit Mall that she bore witness - when Palak complained of stomach ache, Abhinav had reportedly asked her if she was pregnant and also told her to come clean, as later on, an abortion would be impossible, which had led to a fight between him and Shweta. Abhinav Kohli Claims Palak Tiwari’s ‘Clarification’ Post Was 'Deleted and Re-Inserted', But Looks Like He Needs Some Fact Check (View Posts).

This social media argument that Anuraddha and Abhinav had, has led to Abhinav even threatening legal action against her. In fact, Abhinav even posted the screenshots of their comments and posted on his profile a 'see you in court' caption as well. We wonder if Shweta and Palak would ever react to Abhinav's actions.

(The above story first appeared on LatestLY on Jul 11, 2020 05:15 PM IST. For more news and updates on politics, world, sports, entertainment and lifestyle, log on to our website latestly.com).