Anupamaa Spoiler Update: Kavya To Be Exposed for Pushing Vanraj off the Cliff in Star Plus’ Popular Drama?

When Anupamaa will ask Kaya to come out with the truth, the latter will admit that she followed Anuj and Vanraj to the cliff where she saw the duo engage in a fight. 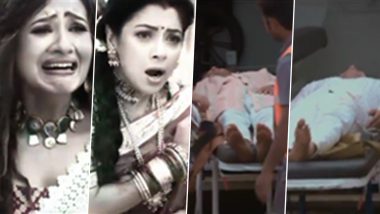 Star Plus show Anupamaa is high on drama. It was only recently that we witnessed Anupamaa’s decision to leave the Shah house as she was terribly insulted by her daughter Pakhi. We recently reported how the drama is going to get all the more interesting now following Raksha Bandhan celebrations. Anuj will soon meet with a terrible accident and this will change Anupamaa’s fate forever! Anupamaa’s Rupali Ganguly Reveals Akshay Kumar Is Her Rakhi-Brother During Ravivaar With Star Parivaar Show (Watch Video).

As Anupamaa finds out she, along with Toshu, Bapuji, Samar and GK will go on a hunt to find Anuj but will fail. Following this drama, Anuj will be shown bedridden. Well, the upcoming drama is going to get extremely exciting as Kavya will once again turn a vamp in the show. While Vanraj and Aunj will be fighting, Kavya will be questioned by Ankush and his family and will be shocked to know that Kavya was aware of the turbulent relationship between them. Anupamaa Spoiler Update: Anupamaa Becomes the CEO of Kapadia Empire Post Anuj Kapadia’s Paralysis in Star Plus Popular Show!

When Anupamaa will ask Kaya to come out with the truth, the latter will admit that she followed Anuj and Vanraj to the cliff where she saw the duo engage in a fight.

Now the whole drama will revolve around whether Kavya is involved in the entire scenario and is the one who pushed Vanraj off the cliff and if Anuj sacrificed himself to save Vanraj! Kavya will be seen in a tight spot where she will be in a dilemma to confess the entire truth. How excited are you to watch the drama ahead? Let us know in the comments below!

(The above story first appeared on LatestLY on Aug 10, 2022 10:47 AM IST. For more news and updates on politics, world, sports, entertainment and lifestyle, log on to our website latestly.com).