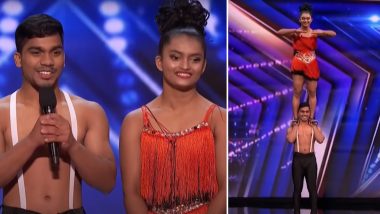 Remember the kids Sonali and Sumanth who were all over the scene of India's dancing reality shows? Yes, the very same kids who performed Salsa like no trained professional choreographers in the country could. Well, Sonali and Sumanth are now all grown up and are making not only India, but also their hometown Kolkata and their dance academy BAD (Bivash Academy of Dance) proud on the International dance scene. America's Got Talent: Mumbai Based Dance Group V. Unbeatable Enters the Finale, Judge Simon Cowell Believes The Final Episode Will be the Greatest One Ever.

Sonali and Sumanth who have acronymed themselves with the name BAD Salsa, were recently on the stage of America's Got Talent's auditions and after giving the most heart-rendering pre-performance interview, went on to give the most amazing salsa performance to Dhating Naach, so much that they went on to receive a standing ovation from the audience and the judges as well. And do not get us started on the shocked gasps and encouraging hooting coming from the audience.

It isn't the first time that Indian dancers have made the nation proud on the International Dance scene. Mumbai's V Unbeatable won America's Got Talent: The Championship's second season in February 2020, Desi Hoppers crew won the World Of Dance Championship in 2015, The Kings won NBC’s World of Dance season 3 in 2019 and now hopes are pinned on the 15-year-old Sonali and 20-year-old Sumanth, to put India on the dance map again. Tune in of America’s Got Talent Season 15 which is exclusively streaming in India on Voot Select, 29th May onwards and also will be airing on Colors Infinity soon

(The above story first appeared on LatestLY on May 29, 2020 10:25 PM IST. For more news and updates on politics, world, sports, entertainment and lifestyle, log on to our website latestly.com).