The series is helmed by Anand Tiwari and co-created by Amritpal Singh Bindra. The music is given by composer trio, Shankar-Ehsaan-Loy. 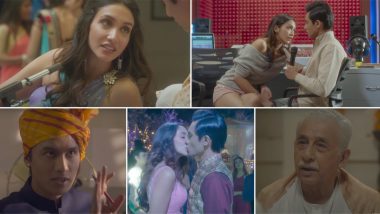 A new show is up for the viewers to binge watch during lockdown. Amazon Prime has announced a new series titled as Bandish Bandits that revolves around the music, guru and a love story. The trailer of the same was released by the makers and it looks quite interesting. The story has two singers dedicated to their respective genres aka rock and classical and how their career and love life takes shape in the journey. Breathe Into the Shadows Review: Amit Sadh Steals the Show From Abhishek Bachchan in This Engaging but Uneven Thriller Series.

The cast includes Naseeruddin Shah, Atul Kulkarni, Shreya Chaudhry, Ritwik Bhowmik, Amit Mistry, Sheeba Chaddha, Rajesh Tailang, Kunaal Roy Kapur, Rahul Kumar in the key roles. In the trailer, it is shown that a girl who specializes in Rock form falls in love with a shy guy who is dedicated to Indian classical form. However, things turn ugly when they decide to collaborate musically and the guy decides to go against the rules of his Guru who taught him classical music. There is also rivalry shown between two of the gurus with regards to the musical form. Check out the trailer below.

The glimpse definitely looks promising and the subject is quite interesting. This is one series to look out for if you are bored with violence or high voltage drama. The series is helmed by Anand Tiwari and co-created by Amritpal Singh Bindra. The music is given by composer trio, Shankar-Ehsaan-Loy.

(The above story first appeared on LatestLY on Jul 20, 2020 03:40 PM IST. For more news and updates on politics, world, sports, entertainment and lifestyle, log on to our website latestly.com).