Former Bigg Boss contestant Diandra Soares took to her social media and has slammed BB 14's Rahul Vaidya for making nasty comment on women. The old tweet by the singer is about slapping a woman during s*x. Read on. 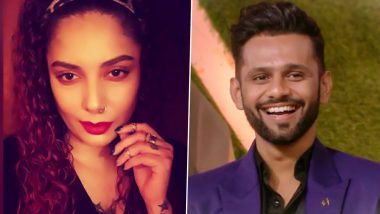 Singer Rahul Vaidya is one of the most loved contestants on Bigg Boss 14. Fans admire him for being outspoken and not mincing words. However, then there's a certain section of people online who do not like Rahul for being disrespectful towards other inmates inside the house. Having said that, now Twitterverse has found an old tweet of Rahul in which he can be seen speaking about slapping a woman's ass during s*x. Well, this objectionable comment by Rahul in the past has not gone down well with former contestant Diandra Soares. Bigg Boss 14: Devoleena Bhattacharjee Reveals Her Strategy As Eijaz Khan’s Proxy in Salman Khan’s Reality Show.

Taking to her Twitter, she slammed Rahul and also re-shared his nasty message. She wrote, "Someone should slap him first before s** !!!!!!!" Well, a little research online and Rahul has uttered the said words online which are clearly offensive. The singer had made this comment on June 4, 2013. We wonder, what the RKV has to say on this now? Bigg Boss 14: Rahul Vaidya, Abhinav Shukla Get Involved in a Massive Fight, Rubina Interferes and Call the Singer ‘Ghatiya Insaan’.

Someone should slap him first before sex !!!!!!! https://t.co/TRx0MAhRYJ

There's NO excuse for hitting a woman, unless you're slapping that ass during sex!

Meanwhile, the latest episode of BB 14 sees Rahul vs Rubina Dilaik. It so happened that during a task, Rubina blasted Rahul for always bringing up hers and Abhinav Shukla's personal life on the reality show. The Shakti actress also mentioned how he is scared to bring his fiancé Disha Parmar on national TV. Stay tuned!

(The above story first appeared on LatestLY on Jan 20, 2021 01:01 PM IST. For more news and updates on politics, world, sports, entertainment and lifestyle, log on to our website latestly.com).