The argument elevated quickly where Rahul charged at Abhinav and they get involved in a physical fight. Aly Goni also loses his calm and shouts at Abhinav asking why is he pushing Rahul like this. 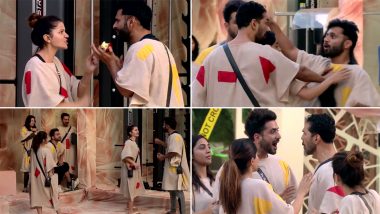 Bigg Boss 14 is nothing without the many controversies that take place inside the house. In the upcoming episode, we will get to see Rabina Dalaik, Abinav Shukla lock horns with Rahul Vaidya,  which not a new occurrence though. The three get involved in a verbal fight when Rahul comments about Abhinav's loyalty towards his wife and Rubina takes an offence. She attacks Rahul verbally which escalates quickly with Aly Goni shouting on Abhinav for making a scene out of nothing. Rubina even goes out to call Rahul a 'Ghatiya aadmi' as well. Bigg Boss 14: Rahul Vaidya Calling Abhinav Shukla ‘Nalla’; Rakhi Sawant Tagging Arshi Khan As ‘Bawaasir’ – BB14 Was All About Crass Language!

A promo shared by Colors Tv shows Rahul discussing how Abhinav did not vote for Jasmin Bhasin during the last nomination. Abhinav brings in Rubina in the conversation who call Abhinav a fool. Rahul slams Abhinav by saying that a person who could not stand for his wife, will never stand up for someone else as well. Rubina then barges in and says that the duo was not sceptical about bringing their partners in Bigg Boss like Rahul, so he has no say in how and who Abhinav votes in a nomination. She goes on to say that if he is a man, Rahul should not use someone's personal relationship to highlight himself.

Catch it before TV on @VootSelect.@BeingSalmanKhan #BiggBoss2020 #BiggBoss14 #BiggBoss pic.twitter.com/h5VGlhIiTY

The argument elevated quickly where Rahul charged at Abhinav and they get involved in a physical fight. Aly Goni also loses his calm and shouts at Abhinav asking why is he pushing Rahul like this. Rubina calls Rahul a narrow-minded person while other contestants try to calm Rahul. What happens next will be a sight to watch and we wonder what punishment will they get from Bigg Boss after this huge fight. Bigg Boss 14: Rahul Vaidya’s Mother Geeta Lashes Out At Rubina Dilaik and Abhinav Shukla, Says Their Plans To Malign Her Son Have Failed.

Apart from this, Rakhi Sawant will be seen missing food a lot. After the punishment given by Bigg Boss, all the food from the house was taken away from the BB house. The housemates had failed to play the task fairly after which Bigg Boss decided to teach them a lesson. Rakhi is seen begging to Bigg Boss to let them eat food. She is also seen talking to a banana and asking it to fill her stomach. Knowing that the episode will have this incident combined with the fight, we are sure our dinner watch will be quite interesting today.

(The above story first appeared on LatestLY on Jan 19, 2021 07:05 PM IST. For more news and updates on politics, world, sports, entertainment and lifestyle, log on to our website latestly.com).