As the finale week of Bigg Boss 14 is next week, we are witnessing a lot of drama. And the latest one sees Kavita Kaushik and Rubina Dilaik locking horns. The two ladies get into a war of words amid which we see Kavita making a voluntary exit from the show. Have a look. 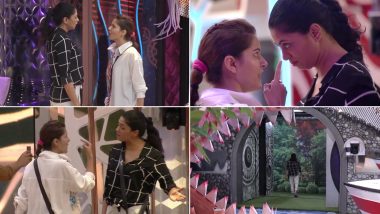 Salman Khan hosted controversial reality is making all kind of noise these days. Right from the contestants revealing their lives dark secrets in a task to getting violent on the show, we’ve seen it all. Now, as per the latest promo released by the makers of BB 14, fans will see an ugly verbal fight between Rubina Dilaik and Kavita Kaushik. Earlier, we’ve seen the two ladies arguing but on tonight’s (Nov 2) episode it’s going to be a war. The video starts with Kavita telling Rubina that she’ll teach her a lesson outside the house. To which, we see Rubina replying that why outside, show it here on national TV. Bigg Boss 14 December 01 Episode: Aly Goni and Jasmin Bhasin Asked To Mutually Decide Who Will Leave the BB14 House - 5 Highlights of Tonight's Episode.

Ahead, KK does not keep calm and screams at Dilaik saying that she will reveal her husband’s truth. This irks Rubina and she lambasts at Kavita and we see both of them screaming and yelling at each other. However, the main highlight of a preview is Kavita exiting the house. Yeah, seems like the FIR actress will make a voluntary exit after the fight. Bigg Boss 14: Rahul Mahajan to Enter Salman Khan’s Reality Show as a Challenger, Ex-Contestant Opens Up About Quitting Alcohol and Cigarettes.

Kavita has time and again said on the show that she is not here to win the trophy, as according to her someone who has the passion should win the reality show. Well, this is indeed shocking, as, after Aly Goni, Kavita is out of the house. Stay tuned!

(The above story first appeared on LatestLY on Dec 02, 2020 01:18 PM IST. For more news and updates on politics, world, sports, entertainment and lifestyle, log on to our website latestly.com).