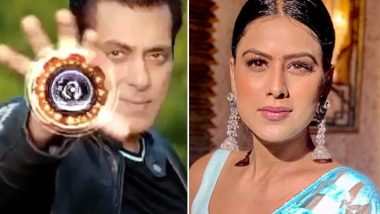 Nia Sharma is quite a prominent face from the entertainment industry. In her career so far, the actress has been part of many hit shows namely Ek Hazaaron Mein Meri Behna Hai, Jamai Raja, Naagin 4 and Khatron Ke Khiladi. She was last seen on the small screen in Ekta Kapoor's venomous show Naagin's fourth season, and well now we hear that she is all set to be part of Salman Khan's controversial show Bigg Boss 14. Earlier, rumours were that she is going to participate in Colors TV most popular reality show, but nothing was confirmed. However, now as per a report in Spotboye, it suggests that the actress has given her nod for Bigg Boss. Yep, that's right! Bigg Boss 2020: Ramanand Sagar's Great-Granddaughter Sakshi Chopra To Be A Part Of Salman Khan's Reality Show? (Details Inside).

A close source to the show told the portal, “Nia was having a lot of apprehensions. In fact, she refused it initially but finally, she is convinced and will get locked inside the BB house this year.” Well, if this is true, fans of the Sharma would be on cloud nine. For the unversed, Nia has been approached for Bigg Boss multiple times, but she never said a yes. We wonder, what made her do so this time. Bigg Boss 14 First Promo OUT! ‘Farmer’ Salman Khan Is Back and He Promises to Change 2020 for Good! (Watch Video).

Currently, the beauty is seen facing her fears on Rohit Shetty hosted Khatron Ke Khiladi: Made In India. Apart from her, the season also sees Karan Patel, Karan Wahi, Aly Goni, Jasmin Bhasin and Haarsh Limbachiyaa. Coming back to Nia in Bigg Boss 2020, are you ready to see her real side on the show? Tell us in the comment section below. Stay tuned!

(The above story first appeared on LatestLY on Aug 11, 2020 08:42 AM IST. For more news and updates on politics, world, sports, entertainment and lifestyle, log on to our website latestly.com).