As per reports, social media queen and Ramanand Sagar's great-granddaughter, Sakshi Chopra has been approached for Bigg Boss 14. Stay tuned! 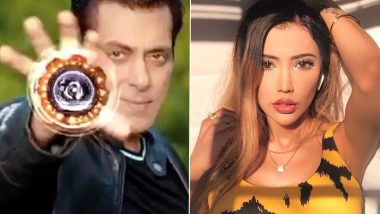 After quite a long wait, on August 8, 2020, the makers of the controversial reality show Bigg Boss 14 dropped a mini-teaser of the series featuring one and only Salman Khan. Reportedly, the show will be aired on September 20, but there has been no official confirmation about the same. As the reality series is nearing its premiere date, many prominent celebrity names who have been approached for the show is making headlines. And well, the latest we hear is that Ramanand Sagar's great-granddaughter, Sakshi Chopra has been approached for the latest season. Bigg Boss 14 First Promo OUT! ‘Farmer’ Salman Khan Is Back and He Promises to Change 2020 for Good! (Watch Video)

As per a report in TOI, a close source to the show has informed the portal that if all things go well than the beauty might be part of Bigg Boss 14. We bet, fans would be quite elated to see a bombshell on the show. FYI, Chopra is LIT on social media and has 508k followers on Instagram. She is an influencer, singer and songwriter, who is supposed to drop her latest single soon. Salman Khan To Shoot Bigg Boss 14 Announcement Promo From Panvel Farmhouse, Show Postponed Because of Khatron Ke Khiladi 10 (Deets Inside).

Here's A Latest Picture Of Sakshi Chopra Below:

That's not it, as Sakshi comes from quite an influential family. She is the great-granddaughter of Ramanand Sagar, who is known for his epic tale Ramayan. Her mother Meenakshi is a producer whereas her father is an astrologer by profession. Reportedly, she is also linked to Bollywood celeb Vidhu Vinod Chopra.

Indeed, going the babe's gorgeousness, we are for sure, she is a perfect match for Bigg Boss. Meanwhile, going by the show's latest promo, this year it is going to be called Bigg Boss 2020 and not Bigg Boss 14. Interesting, right? Stay tuned!

(The above story first appeared on LatestLY on Aug 09, 2020 04:42 PM IST. For more news and updates on politics, world, sports, entertainment and lifestyle, log on to our website latestly.com).