Bigg Boss 14 contestant Rahul Vaidya might get the sweetest surprise of his life on Valentine's Day 2021. As his longtime girlfriend, Disha Parmar might make her presence felt on the controversial reality show. Check out the full story. 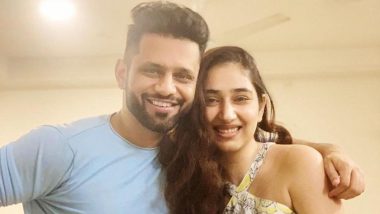 Bigg Boss 14 contestant Rahul Vaidya might get the sweetest surprise of his life on Valentine's Day 2021. As his longtime girlfriend, Disha Parmar might make her presence felt on the controversial reality show. Yes, you right that right! A report on ETimes TV suggests that the actress will be entering the house, not to stay, but only for a few hours. Well, we are sure if these rumour turns out to be true, fans of RKV would be on cloud nine. Bigg Boss 14: Salman Khan’s Reality Show Not Good for Mental Health? Behavioural Scientists Compare Life in the House Like Living in Prison.

Disha Parmar was initially approached by the makers to come on BB 14 as Rahul's connection. However, she denied the offer stating that it would ruin the singer's game and make him weak. Now, this latest report, of Disha and Rahul's get together on national TV on the love day has already made us curious and how. Bigg Boss 14 Expelled Contestant Arshi Khan Accepts Herself As ‘Nightie Queen’.

Currently, connections of every contestant have entered the show. For Rahul Vaidya, we see his buddy Toshi Sabri, as his supporter. It was him who conveyed the message of Disha to Rahul about how she rejected the offer to enter the show as a connection. Bigg Boss 14: Rashami Desai, Kamya Punjabi and Others Call Abhinav Shukla’s Eviction From the Reality Show ‘Unfair’.

Having said that, the latest contestant who got evicted from the show was Abhinav Shukla. He was voted out by the connections. Having said that, this week the full house has been nominated and so is Rahul. Let's see if he can make it to the finale week or not. Bigg Boss 14's grand finale is on February 21. 2021. Stay tuned!

(The above story first appeared on LatestLY on Feb 11, 2021 03:02 PM IST. For more news and updates on politics, world, sports, entertainment and lifestyle, log on to our website latestly.com).