Looks like a mentor and Bigg Boss 13 winner Sidharth Shukla is again making headlines and this time it is with Bigg Boss 14 contestant Nikki Tamboli. Read on. 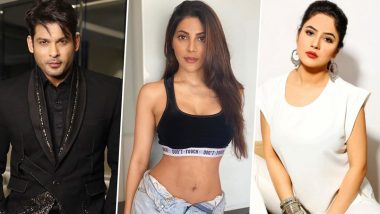 The controversial reality show Bigg Boss 14 is getting interesting with each passing day. The contestant line-up and their curiosity to get noticed proves that sooner or later the show is going to create a record. However, one inmate in particular who has been snatching the limelight since day one is Nikki Tamboli. Adding to it her closeness with Bigg Boss 13 winner Sidharth Shukla has also been the talk of the town. Seems like the girl is on the right track and exactly knows what she is doing. And with this, even a few Twitterati feel that it is time to forget SidNaaz and focus on SidBoli. Bigg Boss 14 Preview: Pavitra Punia Says ‘Aisa Doongi Na’ To Rahul Vaidya Amid Their Nasty Fight Over Daily Chores (Watch Video).

For the unware, it was in the previous season that Shukla's bond with Shehnaaz Gill created quite a stir and the two were termed as SidNaaz by fans. Now, as Nikki's chemistry on the show is getting intense with Sid, a new trend has emerged online which is hashtag SidBoli. Right from seducing Sidharth in the immunity task to confessing that she can marry him, Nikki is leaving no stone unturned. Here are some tweets on SidBoli (Sidharth plus Nikki Tamboli). Bigg Boss 14: Nikki Tamboli's Alleged Boyfriend Denies Any Romantic Relationship With Her.

Now I will stan #SidBoli, ohhh man @sidharth_shukla and Tamboli were looking damn so perfect together nazar na lage and I am the the very first #SidBolian 😂😂😂😂

I m vouching for #SidBoli

Well, on tonight's episode we are going to see Nikki appealing Sidharth by going all wet and wild to win the immunity task and be safe from nominations. Coming back to SidBoli, do you think it'll be as effective as SidNaaz? Tell us your view in the comment section below. Stay tuned!

(The above story first appeared on LatestLY on Oct 08, 2020 10:44 AM IST. For more news and updates on politics, world, sports, entertainment and lifestyle, log on to our website latestly.com).