Tonight's episode saw Pavitra and Kavita's heated argument with captain insisting on bringing discipline in the house. For more updates, keep reading inside. 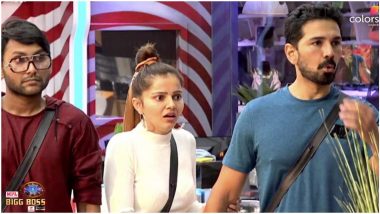 The new season of Bigg Boss is going on in full swing with three new wild card contestants entering the house. While Kavita Kaushik is the new captain of the house, housemates aren't really keen with her captaincy. Tonight's episode was a rather interesting one with contestants openly naming the housemates they want to see eliminated. The episode also saw Pavitra and Kavita's heated argument with captain insisting on bringing discipline in the house. For more updates, keep reading below. [Exclusive] Bigg Boss 14 Wild Card Naina Singh: 'Nothing More Valuable Than Being Real'.

Kavita Kaushik, the new captain of the house has a heated argument with Pavitra Punia. The captain wants to bring in discipline in the house and Pavitra is giving her a hard time.

Rahul complains to Kavita about the quantity of the food that's being served in the house. After much debate and discussion, it gets decided that 2 rotis will be served during the lunch and 2 during dinner. Bigg Boss 14: #Nepotism Trends on Twitter After Rahul Vaidya Nominates Jaan Kumar Sanu For This Reason.

The process of nominations for this week begins with a rather funny task wherein participants have to name the housemates while applying foam on their face. Rahul nominates Rubina.

Rahul Vaidya takes a dig at Jaan Kumar Sanu by calling him a product of nepotism.

Besides Pavitra and Punia who were already in the red zone this week, this week's nomination had Rahul, Rubina and Jaan in danger zone. However, since Kavita had the power to save any one of them, she saved her good friend, Eijaz thereby marking him safe from eviction this week.

(The above story first appeared on LatestLY on Oct 27, 2020 12:06 AM IST. For more news and updates on politics, world, sports, entertainment and lifestyle, log on to our website latestly.com).