Day two of Bigg Boss 14 was all about tasks assigned by the mentors and how well did the rejected contestants perform. Read on to find the answer. 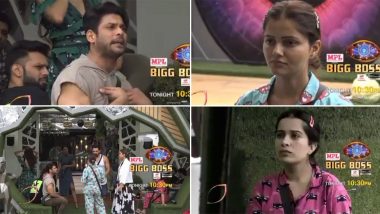 After an okay-ish day one, the next day for the contestants in the Bigg Boss 14 house was all about challenges. Who knew that the three mentors Hina Khan, Sidharth Shukla, Gauahar Khan who were super chilled on the very first day will assign some challenging tasks to the rejected four contestants on day two. From telling Rubina Dilaik to stay for a week in the same pair of clothes to asking Nishant Singh Malkani to wear bikini 24*7 in the house, looks like the toofani seniors are going the right way. Just in case, you’ve missed tonight’s episode, fret not, as we’ve got you covered. Take a look at the five top highlights below. Bigg Boss 14: Mahira Sharma Calls Out Paras Chhabra's Ex and BB14 Contestant Pavitra Punia, Claims She Was Three-Timing Paras.

Bigg Boss 13 winner Sidharth Shukla literally stole the show tonight. Right from pulling Hina Khan's leg, joking with Rubina Dilaik over hygiene, asking Nikki Tamboli to gym with him to spreading his gyaan among the contestants, we could just hear his voice inside the house. As Kamya Punjabi said looks like we are watching Bigg Boss 13 and not 14.

It is Sidharth Shukla once again. Look how popular he is even on the latest season. It so happens that while conversing with Sara Gurpal in the garden area, the singer tags Sid as Punjab ka 'Jija'. We feel she was talking in reference to Shehnaaz Gill and Shukla's chemistry on the previous season. Well, she is not at all wrong though...hehe!  Bigg Boss 14 Preview: Seniors Sidharth Shukla and Gauahar Khan Indulge In An Heated Argument Amid Assigning Tasks To BB14 Contestants (Watch Video).

Rubina Dilaik Argues With The Mentors

Ashanti.. can be the right word as per the day two of the show. As the toofani seniors lure rejected contestant Rubina that she can enter the house, but with a twist. The trio informs her that if she desires, she can step inside the house, but only in one pair of clothes for the entire week. Dilaik could not take this and starts arguing with the mentors. She states that hygiene is very important to her and rejects the task. However, she does eat a bowl of green chillies as per task two.

After Rubina, the seniors did not stop there and went ahead by assigning tasks to other rejected Sara Gurpal, Jaan Kumar Sanu and Nishant Singh Malkani. Sara chops off her hair, Jaan lifts gym's materials as well as flaunts a mohawk hairdo whereas Nishant agrees on wearing a bikini the entire week. The three indeed performed in quite an excellent way.

Bigg Boss throws a googly and asks the rejected ones to select the least deserving inmate from among themselves based on their performance in the first task. After a lot of analysing, Sara, Jaan and Nishant win it by votes whereas Rubina becomes the nirasha janak contestant. Sad.

So, that were the five most happening things that occurred on October 5, 2020, on Bigg Boss 14. As per the preview, day three inside the house looks more dramatic and there is a fight on the way between mentors Sidharth Shukla and Gauahar Khan. Stay tuned!

(The above story first appeared on LatestLY on Oct 05, 2020 11:56 PM IST. For more news and updates on politics, world, sports, entertainment and lifestyle, log on to our website latestly.com).