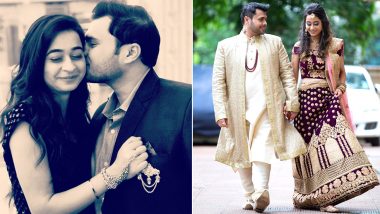 Actor Ankit Shah, who has been a prominent face in the television industry, with over 55 shows under his belt, is all set to tie the knot with fiance Aashima Nair on June 30. The actor was supposed to initially get married on June 11, but because of the chaos and standstill that life has become for everyone in the country because of the COVID-19 pandemic, Ankit and Aashima postponed their wedding to the end of the month. Ankit and Aashima had got engaged on August 15, 2019, and had set the date to June 2020 last year only. Sasural Simar Ka Actor Manish Raisinghan and Naagin 3 Actress Sangieta Chauhaan to Get Married on June 30.

"The wedding was supposed to be a grand event for both the families. We could have postponed it, but the next date available was in November or December. Given the unpredictability of the times we live in, we decided to get married on June 30," Ankit revealed to BT.  Elaborating on how their wedding plans have seen a drastic change, Ankit told the daily, "We had originally planned to invite 500 guests. However, we have now reduced it to 50 people, following the new guidelines. We will perform two rituals at my home, for which I am still in talks with my housing society members. It will be followed by saat phere at the Arya Samaj mandir. We will make sure that every guest goes for a medical check-up a day before the wedding." Rana Daggubati And Miheeka Bajaj’s Pre-Wedding Celebrations Kick-Off: The Bride-to-Be Looks Resplendent in Her Jewelled Masked Avatar (View Pics).

Ankit also revealed that he was borrowing the rulebook of Government guidelines dictated to the entertainment industry- that of not allowing children below the age of 10 and seniors above the age of 55 to venture out. Family members falling under these age groups have not been invited to the do, considering the health risk that it poses to them. "We have sent out digital invites with a request to ‘Please wear a mask and follow social distancing’. We will have a designated person to offer masks and gloves and to sanitise everyone’s hands at regular intervals at the venue. He will also check everyone’s body temperature before they enter the banquet. We will order packed thalis from a restaurant," Ankit revealed.

Given the stir that the pandemic caused and how over the past 3 months, masks have become a norm for us all, trendy and designer masks for brides and grooms getting married during the lockdown have become the new fad. Remember Rana Daggubati's fiance Miheeka Bajaj's photoshoot in traditional attire and a matching mask for her pre-wedding rituals? Somewhat like that.

Says Ankit, "Aashima and I will wear masks that are colour coordinated with our wedding attire. For the sake of those who won’t be able to attend the wedding, we will go live on all social media platforms."

Recalling how he and Aashima, who live in the same building complex fell for each other, Ankit had in an earlier interview revealed that he met Aashima back in 2018 during Ganesh Chaturthi."We felt the urge to talk to each other, but could only stare at each other for the next two months. However, we finally spoke, exchanged numbers and started following each other on social media. Initially, it was only friendship, but soon, we started meeting with other friends in the building and bonded over badminton. Slowly, we fell in love. I love Aashima’s simplicity, innocence and family values," revealed Ankit.

(The above story first appeared on LatestLY on Jun 27, 2020 01:26 PM IST. For more news and updates on politics, world, sports, entertainment and lifestyle, log on to our website latestly.com).