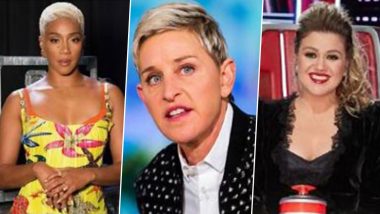 NBC is in the works to choose a successor to Ellen DeGeneres' coveted time slot after the American comedian announced she is pulling off the plug on her popular daytime show after the final 19th season. The television network is in search of a successor who can fill in for popular American daytime talk show -- 'The Ellen DeGeneres Show' -- which is ending after 19 seasons, and Kelly Clarkson's show may be a frontrunner for the same if it strives to experience a surge in popularity, according to TMZ. Ellen DeGeneres Opens Up About Ending Her Talk Show in 2022, Says 'Always Knew 19 Would Be My Last'.

The sources at the network told TMZ that long before COVID-19 NBC makers launched the Kelly Clarkson Show as the heir apparent to Ellen's syndicated hour as they sensed it back that Ellen was probably going to end the show and the Grammy-award winning star Kelly Clarkson seemed like a likely successor.Kelly's show which airs in most markets after DeGeneres debuted in September of 2019 and became the most-watched new daytime talk show in seven years. The show has won three Daytime Emmys last year, including one for Clarkson as the best entertainment talk show host. Ellen DeGeneres Announces Her Talk Show Will End in 2022 After Running for 19 Years.

However, after all this, her show struggled during COVID-19 leading to a slump in the ratings and the production qualities of the show were less than stellar.TMZ learned that as of now her show's performance will be monitored by NBC which will observe whether the show experiences a surge in popularity as production comes back full force. However, if that doesn't happen, NBC will look beyond its current lineup to find a replacement, and a name that has been bandied about is Tiffany Haddish who has frequently filled in for the 63-year-old comedian in the show.

Tiffany would prove to be a perfect successor for Ellen's show but according to TMZ, she has not yet replied to the offer and if she would even entertain the idea of doing a Monday-Friday talk show. Ellen DeGeneres, who on Wednesday announced that her longtime popular daytime show will end after the 19th season in 2022, has made it clear that she is not retiring from the industry and will move forward by focusing on other projects in her kitty.