From Adarsh Gourav’s The White Tiger to Monica Dogra’s The Married Woman, Recent OTT Shows and Movies Adapted From Book

With OTT platforms experimenting with genres and content, there are a host of projects that are based on books. Lately, we have already had the Parineeti Chopra-starrer The Girl On The Train that was based on Paula Hawkins bestseller of the same name. 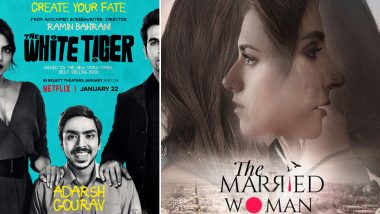 With OTT platforms experimenting with genres and content, there are a host of projects that are based on books. Lately, we have already had the Parineeti Chopra-starrer The Girl On The Train that was based on Paula Hawkins bestseller of the same name. The Oscar-nominated film "The White Tiger" was based on Aravind Adiga's Man Booker Prize-winning book of the same name. The Riddhi Dogra-Monica Dogra-starrer web series The Married Woman is based on Manju Kapoor's book of the same name. Most filmmakers would tell you they prefer not to replicate the book on screen, but merely base their narrative on it. OK Computer: Vijay Varma, Radhika Apte’s Sci-Fi Show to Be Screened at the International Film Festival Rotterdam.

Filmmaker Sahir Raza, for instance, insists he did not completely copy Manju Kapoor's book while creating his web series. "It is such a different concept that most people would fall in love with it even when they read it on paper. That's what happened to me. We have taken the backdrop of the book and the character and adapted it to our story. The show adds a lot of external situations and drama within the lines of the character," Raza told IANS. Sunny Hinduja: OTT Platforms Are Booming and It Is a Good Time for All Artists.

While situations and storylines might be altered, playing a character from the pages of a book is always challenging, says Parineeti. "The biggest thing is that I wanted to reinvent myself and wanted to do work that was different from the rest of my work. These kinds of films put me in the homework zone. I couldn't go without preparing and accessing a different side of me," she said.

Here are a few notable shows that have been inspired from books:

Cobalt Blue is a drama film that has been written and directed by Sachin Kundalkar. It is based on the debut novel of Kundalkar of the same name. The story revolves around a brother and a sister who happen to fall in love with the same person.

THE GIRL ON THE TRAIN

Starring Parineeti Chopra, Kriti Kulhari, Aditi Rao Hydari and Avinash Tiwary, the film based on Paula Hawkins' 2015 novel of the same name was released a while back, and received mixed reactions. The Ribhu Dasgupta film is a murder mystery and a psychological drama.

Based on Aravind Adiga's Man Booker Prize-winning novel, the film has received wide acclaim. Starring Adarsh Gourav, Priyanka Chopra and Rajkumaar Rao, the film is also executive-produced by Priyanka. The film's Iranian-American writer-director Rami Bahrani has been nominated at the upcoming Oscars in the Best Adapted Screenplay category. Bahrani was also nominated in the category at the recent BAFTAs, as was Adarsh Gourav as Lead Actor, but both of them lost out.

The Monica Dogra and Riddhi Dogra-starrer web series is based on Manju Kapoor's book of the same name. The series is about two women falling in love and the circumstances that lead to this.

UNTITLED SERIES based on THE BESTSELLER SHE WROTE

"The Bestseller She Wrote" is a novel by Ravi Subramanian, revolving around love, betrayal and redemption. It will reportedly star Mithun Chakraborty and Shruti Haasan.

(The above story first appeared on LatestLY on Apr 18, 2021 11:49 AM IST. For more news and updates on politics, world, sports, entertainment and lifestyle, log on to our website latestly.com).