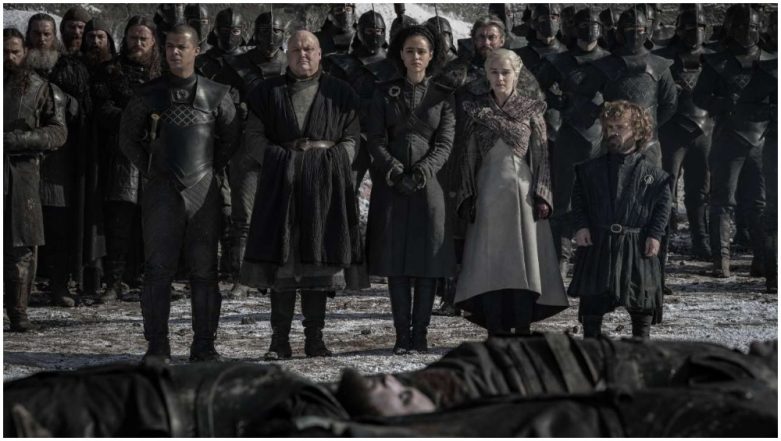 A Still from Game of Thrones 8 (Photo Credits: HBO)

The Nigth King may be dead, but as Tyrion tells Ser Davos Seaworth in the fourth episode of Game of Thrones 8, they have to fight with themselves now. With the threat of the undead gone now, the living has now to argue and battle over who takes the Iron Throne. Of course, it is now Cersei Lannister who is now sitting over it and ruling over the North. But Daenerys Targaryen is having none of it, With Jon Snow (supposedly, the true heir of Westeros), now under her spell, Dany proceeds with her plan to attack King's Landing. Game of Thrones 8 Episode 4 Recap: After Beating the Night King, Can Jon Snow, Arya Stark, Daenerys Targaryen Now Defeat Cersei Lannister?

It doesn't go well. Not only does her dragon, Rhaegel, gets killed by Euron Greyjoy, her most trusted confidante, Missandei is also captured. Towards the end of the episode, Cersei orders the execution of Missandei. A horrified Greyworm and a furious Daenerys watch the Mountain chop off her head, as the episode ends and the promise of worsening of matters permeating heavily in the air. Game of Thrones Season 8 Episode 4: Brienne and Jaime Lannister’s Sex Scene Dubbed As Oathsex by the Internet.

The death of Missandei has definitely left many of the Game of Thrones fans shocked. However, they are not sure if it was gratuitous, a demise for the sake of it. Missandei was one of the beloved characters, and her romance with Greyworm was quite touching. Her killing would push Dany further down her downward spiral that has already begun with her feeling jealousy towards the Starks, including Jon Snow.

Rest in paradise, Missandei of Naath. May you find peace on a sandy shore and may your curls forever pop. #GameofThrones #ThronesYall #Missandei pic.twitter.com/4nLmCLAmiN

Sure, compared to the previous episode, the body count in the fourth episode was quite low. But it mattered. Missandei's demise now leaves Dany seething and we expect her vengeful fury to cause more damage than good.