Game Of Thrones Season 8 Episode 6: THIS Major Character Death in the Finale Will Make You Say 'We Saw This Coming' (SPOILER ALERT)

Game Of Thrones Season 8 episode 6, the finale is finally over. The episode consisted of one major character death, read on to find out who it was. 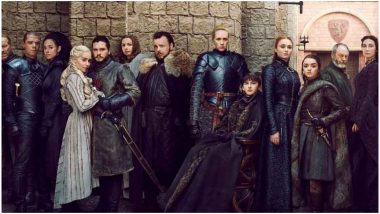 Game Of Thrones finale is finally over and we bet it hasn't. been anything you expected. Adapted from George RR Martin’s books, the series has been unafraid to kill main characters and throw viewers some wicked curveballs and well, the final episode was not any less full of that. The road to the throne had to be a bloody one but with all the action taking place in the penultimate episode, the finale was a little low on that. While several spoilers were around telling us who's dying and surviving, we finally have the answers to all. Game of Thrones 8 Episode 6 (Finale) Recap: Daenerys Targaryen, Jon Snow or Arya Stark – Who Ascended the Iron Throne? Here's All You Need to Know (SPOILER ALERT)

The last episode of the series kicked off with Daenerys Targaryen telling her forces to support her as she plans to 'Break the Wheel' in all seven kingdoms. Of course, the righteous Jon Snow would never let Daenerys get away with all the killing of innocents that she did in King's Landing. In the entire final season, we could see the tension between Jon Snow and Daenerys Targaryen considering their conflicting views and it all came down to the finale when Jon truly had to think if Dany was the 'right' Queen for the throne.

If someone would have told us during the last season that Daenerys Targaryen will die in the finale, we would not have believed that but after the last episode, it seemed evident. What was shocking though was that she was eventually killed by Jon Snow. One of the most important scenes in the season finale is the one where Dany tries to justify her actions to Jon and asks him to rule the 'new world' with her. But Jon, in turn, carves a knife through her heart and kills the Queen.  Game of Thrones Season 8 Finale: Daenerys Targaryen, Jon Snow, Tyrion Lannister, Arya Stark – Who Lives and Who Dies?

While we expected that the finale may have more than one character deaths, it seems the makers thought killing off Dany itself is one big move. So, Game Of Thrones is officially over. Did your favourite character survive till the end? Tell us what you thought about the final episode in comments below.

(The above story first appeared on LatestLY on May 20, 2019 08:12 AM IST. For more news and updates on politics, world, sports, entertainment and lifestyle, log on to our website latestly.com).