Just one more episode and that will be the end of Game of Thrones, the biggest and the most popular TV show right now. 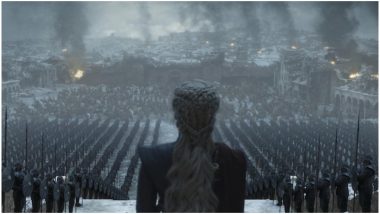 A still from GOT Finale (Photo Credits: HBO)

Just one more episode and that will be the end of Game of Thrones, the biggest and the most popular TV show right now. Produced by HBO, the show is finally ending after eight glorious seasons. The finale has a huge job to do for the show. Apart from tying up all the remaining loose ends of the show, Game of Thrones also has to make sure it goes out on a high for its millions of fans. The highly divisive fourth and fifth episodes of the final (eighth) season have already riled up the fans, who have petitioned for the last season to be remade. That's not going to happen, but the finale of Game of Thrones has a lot to make up for! Game Of Thrones Season 8 Episode 6 Telecast Time And Streaming: How to Watch GOT S08E06 in India.

So what happened in the last episode? Daenerys Targaryen, driven by the loss of her men and dragons, spurned by Jon Snow, and filled with vengeance, became the Mad Queen Game of Thrones has been hinting right from season 1. In the wake of her fury, the King's Landing has been destroyed, and several main characters like Varys, Cersei and Jaime Lannister, Euron Greyjoy, The Hound, The Mountain and Qyburn are no more, Jon Snow and Tyrion are shocked by her actions, and Arya Stark is seething in anger. So what's going to happen next?

A somber Tyrion walks through the charred remains of the citizens of King's Landing, followed by Jon Snow and Davos Seaworth. He leaves the company inside the castle to find what happened to his siblings. Grey Worm, on the orders of Dany's commands, executes the remaining men of Cersei much to Jon's chagrin.

Tyrion goes to the secret getaway that he had asked Jaime to leave with Cersei, but finds it in ruins. Among the hubris, he finds the dead bodies of his siblings, and he breaks down.

Strangely, Arya Stark is still in King's Landing, so we wonder what happened to that white horse from the last episode. Jon Snow goes to meet Daenerys Targaryen, who first addresses her Dothraki and Unsullied army. She thanks them for all their efforts and makes Grey Worm the commander of all her forces. In her speech, she tells that their job is not done - she have to liberate many more kingdoms, which include Winterfell and Dorne!

Tyrion approaches Daenerys and throws away the pin of the Hand in protest. He is arrested for treason (freeing his brother, Jaime). Jon, who finds Arya, is warned by her to be wary of his lover, as she is now a killer.

Jon Snow goes to meet Tyrion where he kept as a captive. Tyrion tells a naive Jon that Dany is not done fighting, and she will bring more massacres. When Jon Snow tries to defend her, Tyrion reminds him that his father and his sister, both evil people, have killed far less than what Dany has done in a day. Also, did Tyrion just confess that he loved Dany? However, Jon is obstinate enough to support Dany as his Queen, but Tyrion tells him that his sisters, Arya and Sansa, won't bend the knee in front of Daenerys and that will put them in danger.

A cool scene happens when Jon walks towards Dany's castle and Drogon who has been sleeping near the entrance covered in snow, makes him halt. When Jon doesn't flinch, the dragon goes back to rest, letting him get in. Daenerys finally finds the Iron Throne, just when Jon enters the area.

Jon asks her to forgive Tyrion and the rest of King's Landing but Dany doesn't agree. Dany tells Jon to be with her when they rule together and kisses him. Jon kisses her back and then stabs and kills her. As he cries over her body, Drogon comes to the place and finds its Mother dead. An angry Drogon is about to open its mouth and Jon thinks it would kill him, Instead, it burns and melts the Iron Throne. Drogon takes Dany's dead body and flies away.

Tyrion is brought to the Council of the Lords for his sentencing. The Council includes Sansa, Bran, Davos, Robin, Yara, Gendry, Brienne, Edmure Tully and the new prince of Dorne. When Grey Worm asks for justice for Dany's killing and punish Jon Snow, Tyrion says that it is for a King and Queen to decide. Edmure tries to take that position but he is asked to sit down by Sansa. Samwell suggests the idea of voting but the others laugh on it.

The Council asks Tyrion for his suggestion, and he says that it should be someone who can have a good story. So he suggests Bran Stark. As for his successor, it will be chosen by the Lords and Ladies of Westeros. When Tyrion asks Bran if he would chose to wear the crown, Bran says why would he have come all this way. The rest of the Council agrees to the suggestion, except Sansa who has a condition - she wants the North to be independent. Bran agrees. Bran also asks Tyrion to be his Hand so that he can 'fix the many mistakes he has made'. Meanwhile, Jon Snow is sent back to the Wall as punishment, and Tyrion is the one who gives the news to him. Jon wears the blacks again as he becomes a Watcher. Grey Worm and the rest of the Unsullied leave for the Isle of Naath.

Jon meets his siblings for the final farewell. Arya tells him that she doesn't want to return to the North and she is planning to go beyond the West of Westeros, where the maps end.

Brienne is reading a book on the Knights of Westeros and comes across an incomplete section for Jaime Lannister. She completes it with many of Jaime's good deeds and ended it with writing that he died protecting his Queen.

Tyrion has arranged for the first Council and is presented 'A Song of Fire and Ice' by Samwell. Everyone is amused to know that Tyrion is not mentioned. When Bran comes in he asks for Drogon. he later tells them that he can himself track the beast down. Jon goes to the wall where he is met by Tormund.

And yay! Jon Snow finally gets to hug Ghost! Sansa is made the Queen of the North, and Arya leaves for the high seas! Jon and Tormund take the Wildlings beyond the Wall to rehabilitate them. And so ends the biggest TV show on Earth, in a bitter-sweet manner.

(The above story first appeared on LatestLY on May 20, 2019 06:31 AM IST. For more news and updates on politics, world, sports, entertainment and lifestyle, log on to our website latestly.com).