How I Met Your Father: Hilary Duff and Suraj Sharma’s Hulu Series Drops a Sweet How I Met Your Mother ‘Cameo’ That Leaves Fans Nostalgic! (SPOILER ALERT)

How I Met Your Mother had starred Josh Radnor, Jason Segel, Alyson Hannigan, Neil Patrick Harris and Cobie Smulders. The late Bob Saget had served as narrator for the series, being the voice for the older Ted Mosby (the first episode of How I Met Your Father pays tribute to the recently departed actor). 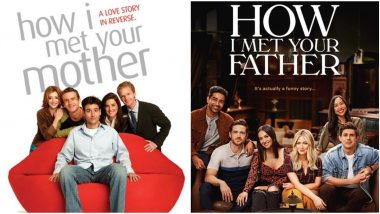 How I Met Your Father, Hulu's spinoff series based on the popular sitcom How I Met Your Mother that ran between 2005 and 2014, has begun streaming on the platform. How I Met Your Father has Hilary Duff in the lead, and is set around her character Sophie and her gang of friends beginning in 2022, with an older Sophie, played by Kim Cattrall, narrating the story to her son on how she met his father. The series also stars Christopher Lowell, Francia Raisa, Suraj Sharma, Tom Ainsley, and Tien Tran. How I Met Your Father Misses Its January 19 Telecast Slot On Disney+ Hotstar, Fans Ask When Hilary Duff’s Series Will Drop In India.

How I Met Your Father retains the loose main plot-thread (of how a person meets her soulmate with interconnecting stories of her friends), the New York setting, the reworked theme song and the director in Pamela Fryman. But it follows a different storyline with new set of characters, and isn't exactly a continuation of the saga of the sextet of Ted Mosby, Barney Stinson, Lily Aldrin, Robin Scherbatsky and Marshall Eriksen.

Or so we thought? If you had that notion, it would change towards the end of the first episode that drops a very crucial How I Met Your Mother cameo. Warning: A MAJOR SPOILER AHEAD! OTT Releases of the Week: How I Met Your Father on Disney+ Hotstar, Unpaused – Naya Safar on Amazon Prime Video, 36 Farmhouse on ZEE5 and More.

The cameo is not of a person.

It is a place.

Or to be more specific, a flat.

Being even more specific, Ted Mosby's flat, where gang mostly hangs out (Marshall, Lily and Robin even stayed there at various points of the show) apart from the bar MacLaren's.

This revelation has made the fans nostalgic, leaving them with the hope that there is a possibility of seeing the HIMYM characters drop in, even as cameos, in the future episodes of the show.

Did You Cry As Well?

It Was a Nice Twist!

The guys living in the original #HIMYM apartment was the cherry on top of this episode of #HowIMetYourFather pic.twitter.com/yS81Dtl69G

Will You Admit It?

Admit it. We all got a little teary seeing this apartment again😢 #HowIMetYourFather #HowIMetYourMother pic.twitter.com/CgXQPDHEg9

Is Marshall and Lily the 'Old Married Couple'? Or Ted and Tracy?

'We got it from this old married couple' ♥ pic.twitter.com/LfFr2noRYk

Since How I Met Your Father's main plotline begins in 2022, it is still eight years away from the time future Ted Mosby began narrating the story of how he met his future wife (now dead) to his kids. It would be interesting to learn if during the course of the spinoff show, we find out if Tracy is still alive, how Barney has been coping with being a single parent, how Marshall and Lily are handling their children, how Marshall found out about Loch Ness Monster and how Robin tackled professional highs. And of course, how they would cross paths with the new gang.

How I Met Your Father is streaming on Hulu. The Indian telecast is unsure at time of writing this article, as Disney+ Hotstar had missed the streaming date for the show on January 19.

(The above story first appeared on LatestLY on Jan 20, 2022 05:32 PM IST. For more news and updates on politics, world, sports, entertainment and lifestyle, log on to our website latestly.com).