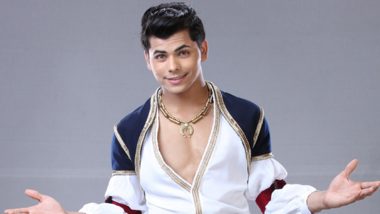 Siddharth Nigam who is a popular face from the telly world is been loved by fans as Aladdin on his show Aladdin Naam Toh Suna Hoga. Not just this, the young actor is also a TikTok star and often garners many comments and likes on the app. Well, prior to Aladdin, Siddharth portrayed the role of Prince Ashoka in the show Chakravartin Ashoka Samrat (2015) and won hearts with his impeccable performance in the same. And now, we hear some latest buzz about Siddharth that it surely make you happy if you are his fan. As in a live chat session with ETimes TV, the actor talked about getting an offer from Hollywood. Yes, you read that right! Aladdin Naam Toh Suna Hoga Actor Siddharth Nigam Reveals His Favourite Shah Rukh Khan Movie (Read Deets).

Speaking to the portal, when quizzed if he is interested to work in the West, Siddharth Nigam shared about his Hollywood offer. He said, “I did get an offer from Hollywood. It is a web series. But due to lockdown, it is on hold.” While the TV star did reveal a big scoop, he also expressed that there is a problem to the tale. “Many other issues cropped up in between. Right now I am doing Aladdin. I also want to make my debut as an actor in Bollywood.”

Further, in the chat, Siddharth revealed how he wants to do an action romantic movie but is not keen on doing intimate scenes. He said, “I want to do films like John Wick. There will be action and romance as well. I am ok with the romantic tracks. But won’t do films which have intimate scenes. I can’t even watch with my mom. It is accepted in Hollywood. But it is difficult here.” Copycat Alert! Siddharth Nigam's Aladdin Lifts Scenes From Game of Thrones 8 and Avengers: Infinity War.

At the end of the interview, the actor also shared that he is inspired by none other than King Khan Shah Rukh Khan. “I like Shah Rukh sir. I like the way he is. His vibrance, his voice, the way he presents himself. The way he has grown in the industry is commendable. I would also love to follow his path," he added. Stay tuned to LatestLY!

(The above story first appeared on LatestLY on Apr 23, 2020 02:19 PM IST. For more news and updates on politics, world, sports, entertainment and lifestyle, log on to our website latestly.com).