After seeing the video, we are sure you must have fallen in love with Shaheer all over again. Although he is a married man now, one can simply not help but fall for his charming looks in the song. he cute, jolly character blends really well with the song. 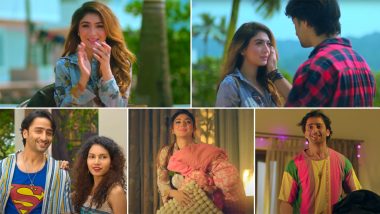 After an intimate wedding celebration, television's handsome hunk Shaheer Sheik is all set to make his fans feel mushy with his new song "Je Tu Na Bulawe". The actor had recently shared the poster of the song and created a wave of excitement amongst his fans. Now, the song is finally out and is winning the internet already. Featuring Shaheer Sheikh alongside Priyanka Khera, the song is all about incomplete love and the importance of friends in life. Je Tu Na Bulawe: Shaheer Sheikh Is Back On Screens, Will Feature In A Music Video Opposite Priyanka Khera.

Sung by Surya, the video begins with Shaheer chilling with his boys when the bell rings and Shaheer's friend is on the door. She informs him that one of their college mates had run away from her home to marry her boyfriend but the guy bailed out and she has nowhere to go. The friend asks Shaheer to let the girl stay with him as her father is after her life. Shaheer initially doesn't agree to help but is then forced by her friend to help the girl out. Shaheer has to kick the boys out in order to let the girl stay. His friends get upset about his behaviour.

Shaheer then realises that this is the same girl he had seen before and felt happy to see her. The two start to spend time together and eventually, Shaheer falls in love with her. He decides to confess his love to Priyanka's character only to find out that her boyfriend has returned. The boyfriend got into a serious accident and hence could not come to take Priyanka away. Shaheer's heart is broken and he goes back to his friends to get over Priyanka. Raas has beautifully depicted the story with his lyrics and Gaurav Dev and Kartik Dev's music is adding the magic.

After seeing the video, we are sure you must have fallen in love with Shaheer all over again. Although he is a married man now, one can simply not help but fall for his charming looks in the song. The cute, jolly character blends really well with the song. He has managed to portray the emotions really well and his chemistry with Priyanka cannot be missed in this heart-wrenching song. Did You Know Shaheer Sheikh Had Not Watched Any of His Shows Until Yeh Rishtey Hain Pyaar Ke Happened?

Apart from this, Shaheer Sheikh will also be seen alongside Rashami Desai ain a music video titled "Ab Kya Jaan Legi Meri". The song will also feature Sana Khan and singer Palash Muchhal. The team had shared the new poster of the song a few days back. Shaheer has been sharing a lot of BTS videos and pictures on Instagram from his time rehearsing for the song as well.

(The above story first appeared on LatestLY on Dec 15, 2020 01:35 PM IST. For more news and updates on politics, world, sports, entertainment and lifestyle, log on to our website latestly.com).